Diane Lane is an actress of ‘Batman v Superman’, ‘Unfaithful’, ‘My Dog Skip’, ‘The Outsiders’ and ‘The Perfect Storm’, etc. 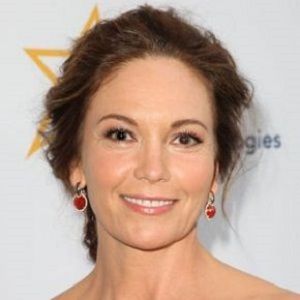 I think that anybody that smiles automatically looks better.

I was raised by free-spirited people, though my father gave me a very strong work ethic.

Sometimes I give with my heart. Sometimes I give financially, but there's something about [helping others] that I think ought to be anonymous. I don't want it to be a boastful thing.

What is the relationship of Diane Lane?

Diane Lane first met Christopher Lambert in Paris during the promotion of ‘The Cotton Club’ in 1984. They had a brief relationship but broke up eventually. They again met after two years for the purpose of making a film titled ‘After the Rain’.

After just two weeks, they again got involved in the relationship. They wanted to make this relationship long-lasting this time and hence got married in October 1998 in New Mexico. They have a daughter from this marriage Eleanor Lambert, who was born on September 5, 1993.

The couple separated and eventually divorced in 1994. Diane became engaged to Josh Brolin who is an actor. They got engaged in July 2003. They later got married on August 15, 2004. This relationship too didn’t quite work out and hence they filed for divorce in February 2013 which was later finalized on December 2, 2013.

Who is Diane Lane?

Diane Lane is an American actress best known for her role in a wide range of movies including ‘Man of Steel’, ‘Batman v Superman’, ‘Unfaithful’, ‘My Dog Skip’, ‘The Outsiders’ and ‘The Perfect Storm’ among others.

She was also featured on the cover of ‘Time’ magazine.

Diane Lane was born on January 22, 1965, in New York City. Her current age is 57. Her nationality is American and her ethnicity is mixed(English, some German, and Scots-Irish).

She was born as a daughter of Burt Lane (an acting coach) and Colleen Farrington (a cabaret singer). Her parents separated when she was 13 days old. Her father received custody of Diane and hence she lived in numerous residential hotels in New York City.

She spent most of his early life days in hotel rooms in New York City with her father. But then later they moved to an apartment and stayed as tenants.

Diane did distance learning. Later in the year 1981, she attended high school.

Diane won her first part for acting in a theater. She later became a member of the ‘La Mama Repertory Troupe’. She appeared in the 1979 movie ‘A Little Romance’. Her appearance on the cover of ‘Time’, profiled her as a rising star in Hollywood.

She wanted to become a model when she was a teenager. But she later moved to the acting job instead. She was always keen to attend the show business since her childhood. Now she has become one of the recurring faces in Hollywood due to her involvement in numerous movies and television series.

She was cast in other numerous movies after the event. Some of the movies include ‘The Outsiders’, ‘Rumble Fish’, ‘The Cotton Club’, ‘Chaplin’, ‘Judge Dredd’, ‘Jack’ and many others. In 2004, she was voted one of ‘World’s Most Desirable Women’. She has mentioned that some of her acting influences are Jane Fonda, Shirley MacLaine, Jessica Lange, and Susan Sarandon.

She was a multimillionaire by the time she was 18 years old. Diane has had 61 credits as an actress for numerous movies and television series. ‘Touched by Love’, ‘Rumble Fish’, ’Six Pack’, ‘Vital Signs’, ‘Night Moves, ‘Indian Summer’, ‘Wild Bill’, ‘Mad Dog Time’ are some of the projects that she has been involved in during her career.

In 2019, she portrayed one of Matthew McConaughey‘s character’s love interests in ‘Serenity’. Moreover, she will also feature in an untitled film with Jeff Bridges in addition to starring in the series on ‘Y: The Last Man. Furthermore, she will also co-star with Kevin Costner in the thriller ‘Let Him Go‘.

Apart from her life in acting, she has also been actively involved in numerous charity work throughout the years. Heifer International is one of the projects that Diane is involved in. However, she is not someone who shows off for her work. She tries to stay away from the limelight for her charitable works. She has become an ambassador for charity work.

Also, she is an Oceana activist and is supporting the cause of protecting oceans.

She has 13 wins and 29 nominations for various awards to her name.

Diane Lane: Salary and Net Worth

Diane was involved in the internet rumor regarding her having plastic surgery to look young. She has denied the claim saying she would never become a product of plastic surgery.

She has been a subject of controversies numerous times due to her aging rate. She still looks young at the age of 51. Diane was also involved in a controversy due to her comment about how she feels ‘Remorse and guilt’ about the ‘Cinema Verite’.

On December 20 of the year she got married(2004), she called the police after an altercation with Josh Brolin, and he was arrested on a charge of domestic violence. However, it was later told to be a misunderstanding.

Moving towards her body measurements, she has a good height of 5 feet 7 inches (1.7 m) with bodyweight 53kg. She has green eyes and her hair color is dark brown.

You may also like to read about Gal Gadot, Scarlett Johansson, Emma Watson.

Who is Diane Lane married to?

Who is Diane's daughter?

“Jumped out of a plane today!!!” Bella Hadid’s Dubai experience, her anti-ban, anti-wall March, and her chronic ailment! Find it all here!