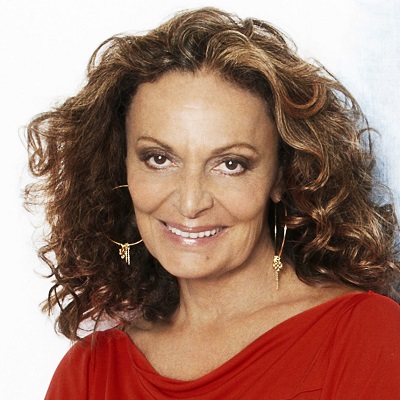 ''I design for the woman who loves being a woman.'' "The minute I knew I was about to be Egon's wife, I decided to have a career. I wanted to be someone of my own and not just a plain little girl who got married beyond her desserts.'' ''I had arranged a birthday party for him and my children, who are all Aquarians. Instead, we got married. I ran out of excuses. It was just us and my children.'' "I had a very down-to-earth product, my wrap dress, which was really a uniform. It was just a simple little cotton-jersey dress that everybody loved and everybody wore. That one dress sold about 3 or 4 million. I would see 20, 30 dresses walking down one block. All sorts of different women. It felt very good. Young and old, and fat and thin, and poor and rich.''

She met him at the age of 18. They together have two children: Prince Alexander and Princess Tatiana. She is now a grandmother of four. However, they divorced in 1983.

In 2001, she married Barry Diller, an American Businessman.

Who is Diane Von Furstenberg?

Diane Von Furstenberg is a Belgian businesswoman and fashion designer best known for her wrap dress. She is the former wife of  Austro-Italian Prince Egon Von Fürstenberg. She has established her own fashion brand, Diane von Furstenberg (DVF).

Furstenberg was born on December 31, 1946, in Brussels, Belgium. She is the daughter of  Leon (Lipa) Halfin and Liliane Nahmias, a holocaust survivor. Her ethnicity is Jewish.

She went to Madrid University then transferred to the University of Geneva to study economics.

After her graduation, She moved to Paris and worked as an assistant to a fashion photographer. She left Paris for Italy to learn about cut, color, and fabric in the factory of textile manufacturer Angelo Ferretti. It was here that she designed and produced her first silk jersey dresses.

Diane Von Furstenberg first started designing clothes in 1970 and introduced her iconic wrap dress in 1972. By 1975, she was making 15,000 of the dresses a week. She appeared on the cover of Newsweek in November 1976. She launched a cosmetic line and her first fragrance, “Tatiana“. In 1985, she moved back to Paris and founded a french publishing house, Salvy. She started the cosmetics and home shopping business in 1991.

In 1997, she relaunched her company and wrap dress. She added jewelry, scarves, and beachwear to DVF (2004). She published her biography, Diane: A Signature Life in 1998, and The Women I wanted to be in 2014. A large exhibition entitled “Diane von Furstenberg: Journey of a Dress” opened at the Manezh which later traveled to Sao Paulo and Beijing.

In 2012, Fürstenberg launched her first children’s collection with GapKids and a denim collaboration with CURRENT/ELLIOTT. Her brand bans the use of all fur, angora, and exotic skin from 2018.

Her clothes have been worn by many renowned faces like Michelle Obama, Catherine, Duchess of Cambridge, Gwyneth Paltrow, Madonna, The brown just to name a few.

In 2008, she received a star on Seventh Avenue’s Fashion Walk of Fame. In 2010, Fürstenberg was awarded a Gold Medal at the annual Queen Sofia Spanish Institute Gold Medal Gala.

In 2014 was listed as the 68th most powerful woman in the world by Forbes; and in 2015 was included in the  Time too, as an Icon, by Time Magazine. In 2016, The new school awarded her with an honorary doctorate.

Diane Von Furstenberg as a Philanthropist

she is the director of the Von Furstenberg Family foundation The Dillerwhich supports non-profit organizations. The foundation supports The DVF Awards and donated $20 million to the High Line.

In 2014, Fürstenberg joined the Ban Bossy campaign as a spokesperson advocating leadership roles for girls. She designed shirts for Hillary Clinton’s presidential campaign.

There is no doubt is a legend and inspiration for all young girls and women out there. With years of hard work and passion, her net worth has reached $1.2 billion.

This designer doesn’t suffer from any scandals and rumors. However, her divorce from Prince Egon has grabbed lots of attention.

Diane Von Furstenberg has a weight of 60 kg and has a height of 5 ft 8 inches. Her hair is in brown color and her eyes are in dark brown color.