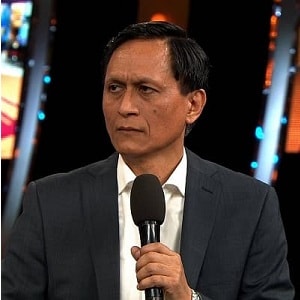 Currently, he is unmarried and his affair and previous relationships, children and family members description are still under review.

Even if he is married or is having an affair, there is no information about his love interest. Being in the journalism field, he knows how to balance his private and professional life.

Dibang is known as a senior journalist of an Indian news channel ‘ABP News’ and he is considered as one of the most rated Hindi journalists in the industry. He is also an actor, who has acted in several documentaries, Italian movie and also in a Bollywood movie, Madras Cafe.

Dibang was born in Lohit, Arunachal Pradesh. He loves to listen to music and watch movies. Since there are no relevant sources of information about his date of birth, family and his childhood, it is still under review.

It is known that he completed his graduation from the University of Delhi. However, his schooling is not known through any sources.

He started his journalism after completing graduation. He debuted from Illustrated Weekly of India and later he worked as a correspondent with The Sunday Times of India. After that, he joined Television and worked with media like NDTV and Aaj Tak. He anchored the first ever debate show called Muqabla and it was awarded for Best Talk Show.

It was also seen that he has been involved with a few foreign movies and television series. He was seen in some television series of Italy, Australi, and Japan. He debuted Bollywood through Madras Café in 2013 and later played in Pink in 2016. He is the rated as the best Hindi Anchor in the industry.

He is the lifelong member of the Press Club of India as well as the Editors Guild Of India.

He has been awarded as Best Talk Show Award at Indian Television Academy Awards 2006. It was the first show to get the award.

Dibang: Salary and net worth

His information is quite secret and his salary and net worth are still under review. His main source of income is the fee he receives for the anchoring and hosting various shows for the channel he works for.

He doesn’t want to be open so much with media so he has not been involved in any rumors and controversies. He keeps his information upon himself.

His height is 5 ft 10 inches and his weight is 65 kg. He is straight in sexual orientation. He has black hair and black eyes. Other body descriptions are still under review.

To know about the childhood, family, net worth, education, rumors, awards, the profession of Anne Thompson, Bomani Jones, please click on the link.