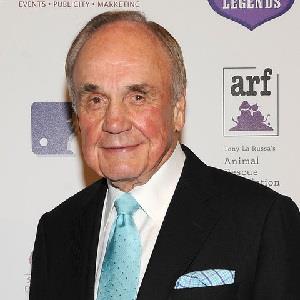 What is the relationship of Dick Enberg?

Dick Enberg had been married twice in his life. His first wife was TV scriptwriter Jeri Taylor. They got married in 1963. The couple together had three children named Alexander Enberg, Andrew Enberg, and Jennifer Enberg. After a decade of their marriage, they divorced in 1973.

Who was Dick Enberg?

Dick Enberg was a retired American sportscaster. He was best known for his works with numerous radio and television networks including NBC, CBS, and ESPN.

He worked as a sportscaster for approximately 60 years. Dick retired from broadcasting in 2016. In his career, he worked with NBC Sports for 25 years.

Talking about his early life, he was born on January 9, 1935, in Mount Clemens, Michigan, USA. His birth name is Richard Alan Enberg. His parents Arnie and Belle were natives of suburban Detroit, Michigan.

He spent his childhood near Pontiac, one of Detroit’s suburbs. His nationality is American and belongs to the Swedish ethnicity.

Enberg completed his high school education at Central Michigan University, where he played college baseball. He graduated from there with a bachelor’s degree in 1957. After that, he attended Indiana University.

From there, he earned master’s and doctorate degrees in health sciences.

Dick Enberg began his career as a sportscaster while he was at Indiana University. While at the university, he voiced the first radio broadcast of the Little 500. He also served as a play-by-play announcer for Indiana Hoosiers football and basketball games at the same time.

In 1961, he first called his first NCAA basketball tournament event. That same year, he became an assistant professor and baseball coach at Cal State Northridge. He left the job in 1965.

Enberg began a full-time sportscasting career in Los Angeles in the late 1960s. At that time, he also announced boxing matches at L.A.’s Olympic Auditorium. From 1973 to 1974, he hosted the game show Baffle. The following year, he joined NBC Sports. He worked there for the next 25 years.

He broadcasted several sports and events for NBC, including the National Football League, Major League Baseball, and the National Basketball Association.

In 2009, San Diego Padres hired him as a television play-by-play announcer. He held the job until his retirement in 2016.

Enberg had won many awards and honors over the years. He has won 13 Sports Emmy Awards and a Lifetime Achievement, Emmy.

Enberg had been National Sportscaster of the Year nine times. He has also won many other awards and honors in his career. In 2006, the LA Sports & Entertainment Commission awarded him the Ambassador Award of Excellence.

In 2015, the National Baseball Hall of Fame awarded him the Ford C. Frick Award for excellence in baseball broadcasting.

This reporter’s net worth was estimated at around $16 million as of 2022.

As per the records, a sportscaster’s average salary is between $18k-$75k per year.

In 2009, Dick Enberg faced a big controversy in a tennis game between Juan Martín del Potro and Roger Federer. In the post-match ceremony, del Potro requested him to address his fans in Spanish.

He declined the request saying that he was running out of time. But when del Potro won the game and made the same request again, he agreed to say “Very quickly in Spanish. Many people and the audience criticized him after the event.

Dick Enberg’s height was 6 feet. His weight and other body measurements are unavailable. His eye color was brown and his hair color was light.