Diedrich Bader is BTVA Special-Award-winning voice artist and actor. He is renowned as Lawrence of Office Space, Greg Otto of American Housewife, and Bill Ericsson of Veep. He is married to the actress, Dulcy Rogers.

Diedrich Bader is happily married to the actress, Dulcy Rogers. The couple exchanged vows on 25th May 1997. 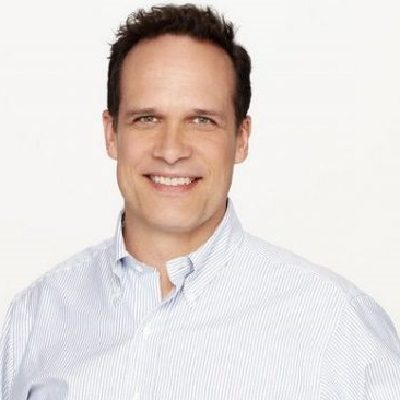 One of the defining things about my career on camera is I like to play different characters. That gets difficult to do. People don't trust you to do something different. In animation, it's all about trust and how far can you go away from yourself. It's a really marvelous environment that's extremely creative.

I remember how, when I lived in Paris, there was a McDonald's, and I'd always see Americans eating there and think, 'Why do they come all the way to Paris and eat at McDonald's?

Who is Diedrich Bader?

Diedrich Bader is BTVA Special-Award winning voice artist and actor. He is renowned as Lawrence of Office Space, Greg Otto of American Housewife, and Bill Ericsson of Veep.

Last, in 2020, he voiced the character, Batman in the series, Harley Quinn.

Next, he will be appearing in the TV Movie, Blind Psychosis as Lyle Larson. Also, he will contribute his voice to the character, in the animated fantasy, Masters of the Universe: Revelation as Trap Jaw.

Both of his upcoming projects are in the stage of post-production.

Diedrich Bader was born on 24th December 1966 in Alexandra, Virginia, United States. His birth name is Karl Diedrich Bader. He is of Jewish-Germanic ethnicity.

He is a son of the Gretta Bader and William B. Bader. His Lt. mother, Gretta is a sculptor by profession. She was popular for her bronze portrait work. Whereas his Lt. father, William was an Assistant Secretary of State for Educational and Cultural Affairs from 1991 to 2001.

He has three siblings; Christopher, Katharine,  and John. He was just two years when he moved to Paris.

Moving toward his academics, he completed his High School education at the T.C. Williams High School in Alexandria. Before that, he attended Groveton High School in Fairfax County after returning to the United States.

After that, he enrolled at the University of North Carolina School of the Arts.

Diedrich Bader stepped into the entertainment industry with a guest appearance in the TV series like Star Trek, Cheers, and 21 Jump Streets. With his appearance, he became quite a popular face in the TV industry.

Soon after a grip in the industry, he also started contributing his voice in the animated films. Some of his initial movies as movies like Recess: School’s Out, Ice Age, The Country Bears, and many more.

On the other hand, he also made his appearance in movies like The Starving Films, The Preppie Murder, The Beverly Hillbillies, and Teresa’s Tattoo in some character roles.

In the time interval, he left his impact on the TV industry too with the TV series, The Drew Carey Show. In 1995, he entered the sitcom as a trainee nurse, Oswald Lee Harvey. Till 2004, he completed the 233 episodes with the series. Some of his other TV series as an actor along with the year and the character roles is-

In 2016, he appeared in the comedy-drama, Better Things. In the series, he is portraying the character of gay, Rich as Sam Fox’s best friend. The same year, he made his appearance in the sitcom, American Housewife as a leading character, Greg Otto. As of 2020, he has completed the 5th season with both sitcoms.

As a voice actor, some of his TV series along with his character and the year are-

Diedrich Bader has hazel eyes with brunette hair. He stands at a height of 6 feet 2 inches and weighs around 85 kg.

Managing his career as an actor and voice artist, he has managed distance from any type of controversy and rumors.