Diego Maradona started going out with singer Lucía Galán in 1982 just after securing his move to Barcelona. However, this affair frizzled out in 1983, when Maradona expressed his wish to return to his former girlfriend Claudia.

Maradona and Claudia Villafañe were childhood sweethearts. Maradona had put this relationship on hold in 1982 after moving to Barcelona. However, they eventually united and got married on November 7, 1984, and got divorced in 2004. Their first daughter Dalma Nerea was born on April 2, 1987, and second daughter, Gianinna Dinorah was born on May 16, 1989.

Moreover, Diego had a fling with Cristina Sinagra in 1985 and they had a son, Diego Maradona Jr. in 1986. Diego met Valeria Sabalain in 1995 in a nightclub and had a very short-lived fling, which resulted in a daughter, Jana. Valeria filed a paternity suit in 2007 against Maradona, which she eventually won.

After separating from Claudia, Maradona had a brief affair with Argentine actress Silvina Luna. Although they never confirmed their relationship in the press, they were still spotted getting close at a number of parties. He also started dating Veronica Ojeda in 2013 after meeting through mutual friends. Veronica gave birth to Diego’s youngest child, a boy in 2013, Diego Fernando Maradona Ojeda.

Currently, Diego started dating Rocio Oliva, a former soccer player in 2013. In February 2014, they got engaged in Rome on the eve of Valentine’s Day. 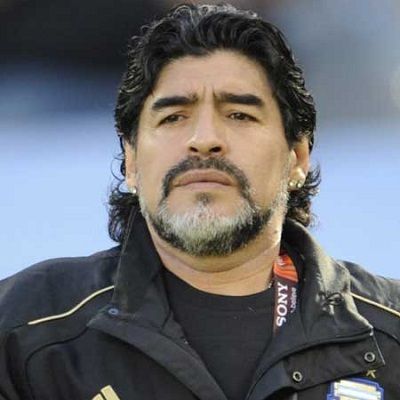 I like English football, always have. It's just that people go on about the World Cup in 1986 and then I'm seen as the real bad boy.

The ball must not be stained.

Who is Diego Maradona?

Diego Maradona is an Argentine retired professional footballer and current manager of Mexican second-division club Dorados. Diego Maradona rises up to the ranks, within a short period, to become the greatest football player of all times.

His phenomenal talent soon caught the attention of a talent scout who inducted him in Los Cebollitas, the junior team of Buenos Aires’s Argentinos Juniors. He led Los Cebollitas to a 136-unbeaten streak, displaying his prodigious capability and talent.

Taking about Diego’s education history, there is no information about his educational achievements.

Talking about his profession, in the year 1976, a little before his sixteenth birthday, he made his professional debut with Argentinos Juniors. Additionally, his proper international debut came on February 27, 1977, against Hungary. His first senior goal came in a match against Scotland at Hampden Park on June 2, 1979. Argentina won the match by 3-1.

In the year 1979, he played for Argentina in the FIFA U-20 World Cup and helped the team won the tournament. It was while playing for the club team that he secured his first league championship medal. During 1982, he played his first World Cup tournament.

Whereas, in his two seasons with Barcelona, he scored 38 goals in 58 games. However, a dispute with the club president and team director led to his transfer to Napoli in Italy’s Serie A for another world record fee, 6.9m. His association with Napoli was the most fruitful of all and brought successful results for both himself and the club.

Not only did he reach the pinnacle of his career, but assisted the club to enjoy immense success and victory. He led the club to win the Serie A Italian Championships twice in 1986-87 and 1989-90. Meanwhile, at the 1986 FIFA World Cup, he led Argentina to victory.

This marked the steep decline of the once-flourishing career. In the year 1991, he received a 15-month suspension after testing positive for using cocaine. In the year 1992, he left Napoli to join Sevilla of Spain, where he played for a year. Following year he played for Newell’s Old Boys. This also marked an end to his international career which spanned for 17 years. He joined Argentine Primera D club Deportivo Riestra in 2013 as its ‘spiritual coach’.

He won the Golden Ball award at the 1986 FIFA World Cup. In 1999, he was bestowed with the Diamond Konex Award, which was one of the most prestigious culture awards in Argentina from Konex Foundation, Argentina, for being the ultimate sports star of the decade.

He has an estimated net worth of around $100 thousand  (as per 2022 data) and he has earned that sum of money from his professional career. Diego’s net worth is currently at the mercy of Italian tax authorities who in February of 2013 ordered the retired soccer star to pay more than $50 million in back taxes.

In 2001, Italian authorities declared that he owed $45 million in unpaid taxes penalties, charges, and interest. He paid just $ 48, 000, 2 luxury watches and set of earrings. Another controversy in the year 2017, he accused his two daughters and ex-wife of stealing $4.5 million from him and asked them to be jailed.

During 2018, he was caught in a controversy when during Argentina Iceland FIFA World Cup match he was seen smoking a cigar in stadiums of the World Cup. After England defeated Colombia in the 2018 World Cup round 16.

Diego Maradona has a height of 5 feet 5 inches. Additionally, he weighs is 76Kg. In addition, his chest, waist, biceps sizes are 42-37-14 inches respectively. Maradona’s hair color is black and his eye color is black.

Also, read the affair, salary, the net worth, controversy, and the bio of Mauro Icardi, Rory Allen, Emiliano Sala