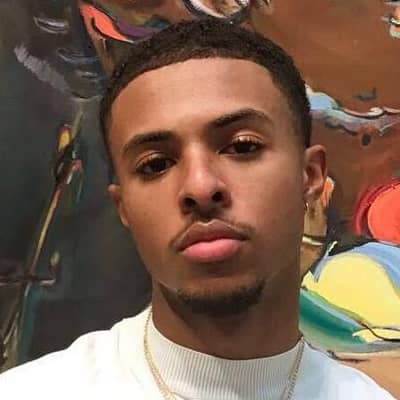 Diggy Simmons appears to be Single. Currently, he is not dating anyone. However, previously he has been in many relationships.

In 2010, he is rumored to have hooked up with Destiny Thompson but the duo hasn’t spoken anything regarding the rumors. From 2011 to 2012, he was engaged with Jessica Jarrell but the pair separated after a year. Jessica is a singer and songwriter by profession.

Who is Diggy Simmons?

Diggy Simmons is an American renowned rapper, singer, songwriter, model, and actor. She is better known as the fourth child of Joseph Simmons.

Simmons was also a part of Lupe Fiasco’s short-lived rap collectives, ‘All City Chess Club‘ as the youngest member.

Diggy was born in Queens, New York, US on March 21, 1995. Professionally, he is commonly known as Diggy but his full name is Daniel Dwayne Simmons II. He belongs to American nationality and is of African-American descent.

Diggy is the son of Joseph Simmons and Justine Jones. His father, Joseph is an American rapper and TV personality. Joseph is also one of the founding members of the influential hip-hop group, RUN-DMC. Likely, his mother is also a well-known actress.

Diggy has two siblings named Russell “Russy” Simmons II and Victoria Anne Simmons. Sadly, his sister, Victoria had already passed away due to omphalocele disease, which is a birth defect. Also, the MTV crew has documented her death.

He has also four more siblings three were from his father’s previous relationship named Vanessa Simmons, Joseph Ward Simmons Jr., and Angela Simmons. After his sister’s death, his parents adopted a baby and named her Miley Justine Simmons.

Further his academic details are under the curtain at the moment.

Diggy began his music career in 2009 where he released his first mixtape, The First Flight. After releasing his debut mixtape five record labels showed interest in signing him where he signs with Atlantic Records.

In early 2010, he uploaded a video freestyling over Nas’s song, “Made You Look” featuring himself which went viral. Regarding the video also Kanye West praise via Twitter stating that he knew Simmons is going to killing the industry.

In 2013, he debut his acting career and had a small role in the comedy Parental Guidance along with Billy Crystal, Bette Midler. However, his part in the movie was cut due to some creative changes.

Later, he started in his own 2 hours TV movie/show, ‘The Start Up’ on BET. He has also appeared in a recurring role on the TV series Grown-ish where he played the role of Doug as Jazlyn’s boyfriend which is played by Chole Bailey. He has been featured in the MTV reality television show, Run’s House alongside his parents and five siblings.

– In 2011 he nominated in the category of YoungStars Award however, he awarded in 2012 for the same category.

– He won the award for Outstanding New Artist.

– Nominated in the Category of Male Reality/Variety Star.

Diggy has earned a fair amount of wealth in his career throughout his multiple profession as a rapper, singer, songwriter, model, and actor. In addition, he has also done several endorsed and promoted various brands like Dries Van Noten, BODE, Salvatore Ferragamo, and so on.

As of 2021, he has an estimated net worth of around $3.75 million. Furthermore, his salary, yearly income, and other assets are still under review.

Simmons has an impressive height of  5 feet 9 inches tall and his weight is around 72 kg. He has dark brown hair color with dark brown pair of eyes. Further, his other body measurement is still under review.

He is active on Facebook with an amassed of nearly 2.9m followers. The actor has also shared his e-mail id [email protected] for any business inquiries.