British Dino Lalvani is a businessman, the CEO of Binatone Electronics Internation Limited.

Dino Lalvani is happily married to the Australian-Indian model and actress, Lisa Haydon. The couple married each other on the 29th of October 2016 after dating a few years.

On 17th May 2017, the couple welcomed their first baby, Zack. Later, in February 2020, they were blessed with another son named Leo. 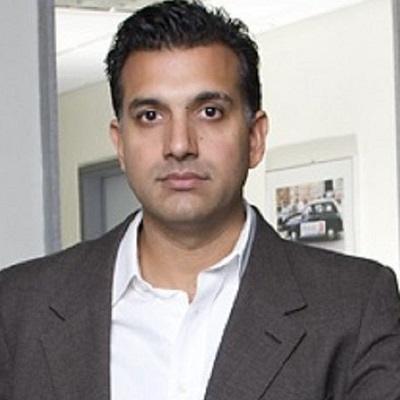 Who is Dino Lalvani?

Dino Lalvani is a businessman. He is the CEO of the telecommunication business, Binatone Electronics Internation Limited.

Dino Lalvani was born in 1973 in the United Kingdom in a business-class family. He is of East-Asian ethnicity with Indian roots and Sindhi heritage.

His father, Gulu Lalvani is the founder and chairman of the telecommunication company, Binatone. Gulu was born in Karachi pre-partition of Indian.

His mother, Vimla Lalvani is a yoga Author and Conscious Living Mentor by profession. Also, his uncle, Kartar Lalvani is a businessman and the founder and chairman of Vitabiotics.

Moving to his academics, he attended Babson College in Wellesley, Massachusetts.

– In October 1995, he joined Binatone Electronics International Limited. The British-Hong Kong-based telecommunication company, Binatone was founded by his dad, Gulu, and uncle, Partap. The company is named after their sister, Bina.

– After working for the telecommunication company for 13 years, he bought the company from his dad. Since then, he is managing the company as a chairman and CEO.

– In January 2011, he founded the internet of things company, Hubble Connected.  The company produced various technologies including a baby monitor, Halo+, and many more. Also, he happens to be the chairman of the company.

Talking about net worth, his dad, Gulu has a net worth was estimated to be £435 million in 2008. Also, his cousin, Tej Lalvani who happens to be CEO of Vitabiotics has an estimated net worth of £390 million in May 2019.

Dino Lalvani has black eyes with black hair. He stands at a height of 5 feet 10 inches and weighs around 80 kg.

To date, he has not been part of any type of scandal and controversy that created a buzz in the media. Besides that, he has also managed distance from any rumors.