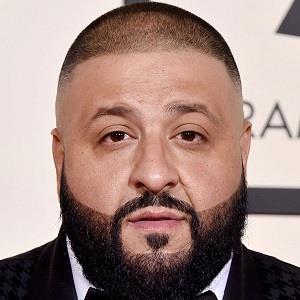 I can deal with everything. I got the answer for anything. This DJ Khaled.

My fans expect me to be greater and keep being great.

There will be road blocks but we will overcome it.

hey will try to close the door on you, just open it.

The pair welcomed their second child, a son named Aalam Tuck Khaled was born on January 20, 2020.

As of now, the relationship is going strong as there is no news about any other related affairs.

Who is DJ Khaled?

At present, he is the o president of record label ‘Def Jam South’ and CEO and founder of ‘We the Best Music Group’.

Khaled was born in New Orleans, Louisiana on November 26, 1975, to parents who had immigrated to the United States.

His brother Alec Ledd (Alla Khaled) is an actor.

His father and mother were musicians and played Arabic music. He developed an interest in rap and soul music at a young age.

He is of American /Palestinian nationality. Furthermore, he belongs to the Palestinian Arab ethnic background.

Khaled initially became acquainted with several young artists and helped them before their breakthrough; these include Birdman, Lil Wayne, and Mavado.

During the early ’90s, he DJ’d in reggae sound clashes. And towards the end of the 90’s he started his radio hosting career, as the host of ‘The Luke Show’.

Khaled began recording his own songs after working with several music artists. Furthermore, in June 2006, his debut album called ‘Listennn…’ was released.

His second album ‘We the Best’ was released a whole year later. Since then, he has released other albums like ‘Victory’, ‘Suffering From Success, ‘Major Key’ and ‘Grateful’.

In late 2015–16, a number of Snapchat videos of Khaled detailing his ‘key to success’ received significant attention on the internet. n 2016, he wrote a book, ‘The Keys’, which includes his opinions on success.

Additionally, he also had a cameo appearance in promotional material for ‘Spider-Man: Homecoming.

In addition, he has collaborated with some famous names in music like Jay Z, Future, Kanye West, Big Sean, Lil Wayne, and Rick Ross.

Khaled has not revealed his current salary. However, he has an estimated net worth of around $65 million at present.

There was a rumor suggesting that Khaled might be involved in a feud with rapper Birdman.

Additionally, he became part of a controversy after he got a major lawsuit alert over his album ‘I Got the Keys.

In addition, his performance in Electric Daisy Carnival also attracted numerous controversies. At present, there are no rumors concerning Khaled’s life and career.

Talking about his body measurement, DJ Khaled has a height of 5 feet 6 inches or 168 cm. Additionally, he weighs around 106 kg or 234 lbs.

Furthermore, his hair color is black and his eye color is also black.

In addition, he has more than 15.9M followers on Instagram.