Skip to content
Married Biography
Married Biography / Entertainment / DNCE is an American pop band with Joe Jonas, Jack Lawless, Cole Whittle, JinJoo Lee-"imperfect awesome[ness] of the four of [them] together." 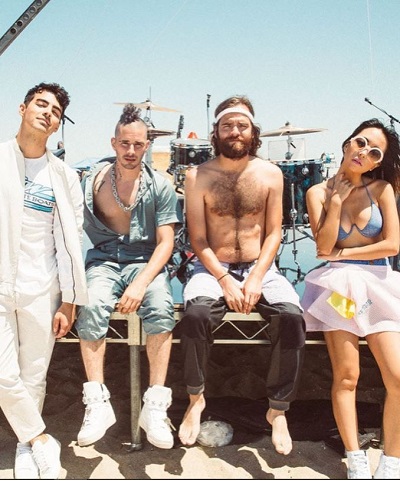 During late 2013, Jonas Brothers (American pop rock band) were in a break. Initially, Joe from the band was living with Jack Lawless, they had a project but it was kept on hold. Then, JinJoo Lee entered and formed DNCE in 2015. After that, they began working for their debut studio album. But the struggle for the fourth band member was the only problem.

The name DNCE was brought after the name of a song written for the album which was lyrically spoken of being too drunk to spell the word “dance”. Furthermore, Jonas described the band name as the,

“imperfect awesome[ness] of the four of [them] together.”

The band name also symbolizes we do not have to be a perfect dancer to dance in life. They came up with their official Instagram account in September 2015. Follow them @dnce which has 1.5 million followers.

DNCE with their musical journey

Dance-rock group DNCE hit the mainstream with the EP “Swaay” and single “Cake by the Ocean” in 2015 signed with Republic Records. It became an international hit leading them through a self-titled debut LP in 2016 which hit the U.S. Top 20.

In 2016, the full-length DNCE, came up featuring production and songwriting contributions from the amazing personnel like Sir Nolan, Ilya also with Justin Tranter an American musician, songwriter, and activist.

With the success of “Cake by the Ocean” and “Body Moves,” the album performed well, landing in the Top 20 of the Billboard 200. After their large touring, this band came up with their new EP titled People to People in 2018.

With they are featuring singles “TV in the Morning”, “Lose My Cool”, “Man On Fire” and “Still Good.” They were also nominated for the Kids’ Choice Awards and Best Song to Lip Sync and Best Anthem for the Radio Disney Music Awards all on 2016.

2017 was a year of collaboration. DNCE made a collaboration with Nicki Minaj on their single “Kissing Strangers”. For the reimagined version of “Da Ya Think I’m Sexy”, the band had a collab with icon Sir Rod Stewart.