Dodie Clark is an English singer-songwriter and YouTuber. Dodie Clark was once in a relationship with Tow Law. 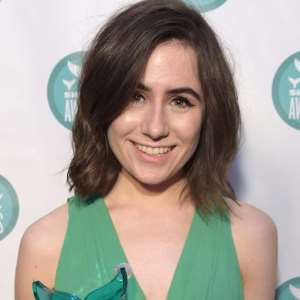 “When you can't find your purpose in a day, make it look after yourself.”

“My rotting brain had lied to me

of course, talking would help. Of course, my loving, caring friends telling me it would get better would help. They fed ropes down the hold I'd been digging, and even if they couldn't pull me up, they at least reminded me that there was a world beyond this, where I'd been before.

“Life is a bus ride, with only so many seats. It took me a long time to comprehend that sometimes people had to leave my life, to make room for the better ones, but once I understood that it became easier to let go, and I was surprised at just how quickly new, interesting people somehow found their way onto my bus.”

What is the relationship of Dodie Clark?

Dodie Clark was once in a relationship with Tow Law. After breaking up with Law, she dated YouTuber Sammy Paul. In November 2015, Dodie disclosed on Twitter that she is bisexual. She later talked about her bisexuality in a video that she posted on YouTube in 2016.

Who is Dodie Clark?

Dodie Clark is an English singer-songwriter and YouTuber. She is better known for her videos of playing the Ukulele and singing songs. Likely, she has a YouTube channel called Doddleoddle which has subscribers over 1.2 million.

She has two siblings namely, Hedy and Iain. Dodie holds British citizenship, but her ethnicity is unknown. Her birth sign is Aries.

Talking about Dodie’s education history, Dodie Clark went to The Leventhorpe School, which is a secondary and 6th form school in Sawbridgeworth, Hertfordshire.

Talking about her profession, Dodie Clark created her first ever YouTube channel in August 2007 along with her friend Alice Webb. Originally called “Dodders5”, this channel was later renamed to “Alice and Dodie show!” A few years later, on 7 February 2011, she created her main channel titled “doddleoddle”.

Clark posted an original song titled “Rain” on 14 April that year. This was followed by several more original songs as well as covers. Then on January 28, 2012, the English beauty came up with her side channel titled “doddle vlogger”. She employed this channel to post her vlogs concerning her personal life. Till date, the side channel owned by Clark has over 300 videos, all of which are worth watching.

On 18 November 2016, Clark released her first EP titled ‘Intertwined’ which charted at No. 36 on the UK Albums Chart within the first week of release. This album contains several singles including “Intertwined”, “Absolutely Smitten”, “Life Lesson” and “Sick of Losing Soulmates”, to name a few.

She has an estimated net worth of around $450 thousand (as per 2022 data) and she has earned that sum of money from her professional career.

In one of her videos, she has revealed that at the age of 17, she was in an abusive relationship with someone who was 22 years old. The abuse started just weeks after they started dating as he abused her for not putting the bowl in the exact position. She revealed that they dated for about 2 years before her friends managed to pull her out of it.

Dodie has a height of 5 feet 7 inches. Additionally, she weighs is 53Kg. Hence, her hair color is dark brown and her eye color is hazel.

Also, read the affair, salary, the net worth, controversy, and the bio of Louise Redknapp, Robert Smith, David Bowie