Posted on May 17, 2022 | In Entertainment , Interesting Facts
Share this 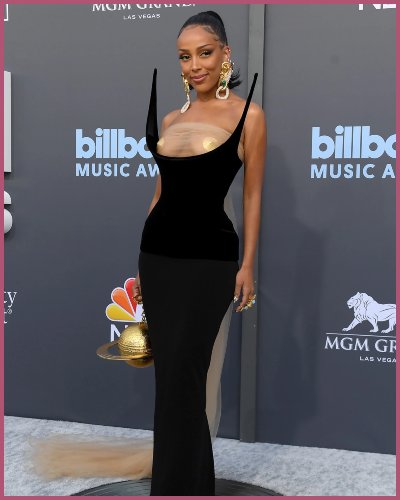 Doja Cat is seen in Billboard Music Awards 2022 after she announced quitting music on March 24, 2022.

The Planet Her studio album hitmaker, won the best R& B album award for Planet Her in Billboard Music Awards 2022.

The question continues as fans expect the 2022 Billboard Music Awards and Grammy Award-winning rapper to return.

It is unknown if she altered her decision and Doja cat is working on a new music project followed by collaboration. Wait for the next update that might come along.

The 26-year-old rapper announced to quit music on March 24, 2022, after people criticize her for canceling her set at Paraguay’s Asunciónico festival due to flooding.

Also, Read about Nicki Minaj retiring from showbiz to start a family with her boyfriend Petty!

Talking about the red carpet looks, the Doja cat wore a sea foam-colored off-shoulder Versace gown. The corseted bodice dress was dripped in the crystal which she paired with matching platform shoes and glittering diamond jewelry. Her glass purse filled with golden candies from Coperni stole the red carpet.

Also, Read BTS V gets flirty with Olivia Rodrigo at the Grammy Awards 2022

Who is Doja Cat?

The musical artist began making and releasing music on SoundCloud as a teenager. Her music genres are R&B, pop, hip-hop, and pop-rap.

Cat and Nicki Minaj hold Guinness World Records as the first female rap duo to rank No. 1 on the Billboard 100. Read more bio…

Also, Read Find out the reason why Teyana Taylor wants to quit the industry! Also, know about her married life, children, net worth, biography