Dolores Catania is an American television reality star, Philanthropist, and Entrepreneur. She is currently in a relationship.

Dolores Catania is in a relationship with David Principe. David is a doctor of perinatologists.

Dolores started dating David after the reality show’s season 7 reunion. Despite Dolores split-up with her ex-husband, they remained a business partner.

Also, she has two children a son and a daughter from her marriage to her ex-husband. The pair welcomed their first child a son named Gabrielle Catania on September 25, 1995, and Frankie Catania on October 8, 1998.

Previously, she was married to a businessman, Frank Catania. However, they divorced because of irrecoverable differences. 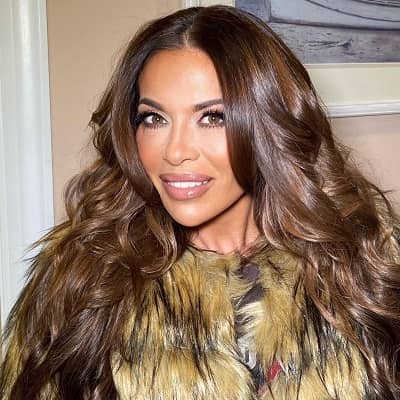 Who is Dolores Catania?

Dolores Catania is an American television reality star, Philanthropist, and Entrepreneur. She gets recognized for being a main cast member in the seventh season of the hit Bravo series the Real Housewives of New Jersey.

The reality star was born on December 28, 1970. The birthplace of Dolores is in Paterson, New Jersey. She is of American citizenship and belongs of Italian and Irish descent.

Her father is chief police, however, the identity of her parents including father and mother is not known. She has a brother named Louis Spagnola and a sister but her name is unknown.

Talking about her educational journey, she enrolled at Seton Hall University to pursue her Juris Doctor with a specialization in Gambling Law.

Dolores was employed as a corrections officer and worked as a surgical technician and realtor before appearing in the reality show.

In 2016, Dolores Catania came into the limelight as the main cast in the seventh season of the Bravo TV reality show, ‘The Real Housewives of Dallas’.

She started the shown alongside other participants such as Teresa Giudice, Jacqueline Laurita, Melissa Gorga, Siggy Flicker. From the show, she has won her a huge fan base and popularity also made her a household name.

Similarly, she is a strong-willed businesswoman who started her entrepreneurial journey with ex-husband Frank Catania. They establish a Gold’s Gym franchise in Teterboro, New Jersey.

Even after their official separation, they have continued to remain business partners and are successfully growing their fitness empire with each passing day.

Also, she later opened the Powerhouse Fitness Center of Whippany on her own. Besides, she is a social worker and is actively associated with multiple charities such as St. Joseph’s Children’s Hospital, Maimonides Breast Center, Halfway Home Animal Rescue Team, and so on.

Dolores came in a bit of buzz after revealed that she still lives together with her ex-husband in their marital home. But the two are adamant that they are just friends.

Besides, she hasn’t seemed in any sorts of rumors and scandals that create headlines in the media.

Also, she stays away from such controversial acts.

Dolores has an accumulated net worth of $4 million as of 2022. However, her yearly income and others are unknown.

Also, she earned a decent bank balance through the reality show, The Real Housewives of New Jersey. As per other online sources, she earns around $30 thousand per episode.

The reality star stands at the height of 5 feet 7 inches tall and her weight is around 62 kg. Likely, she got brown hair and her eye color is brown as well.

Furthermore, her exact body measurements for breasts, waist, and hips remain unknown, but she has maintained an attractive body figure even in her 50s and also being as a fitness owner.

Dolores is active on Instagram with over 610k followers to date.

Likewise, she has a Facebook account where she has amassed 35k followers with more than 32k likes.

Frank Catania and David Principe’s friendship is what we all need in 2021!