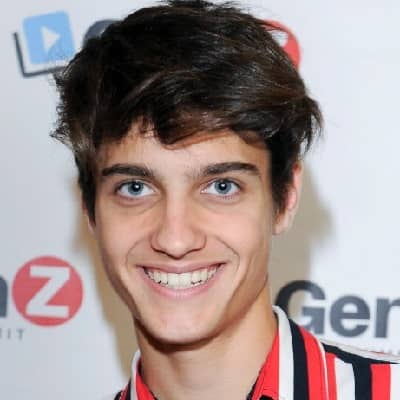 Dom has maintained a low profile and covering his love affairs away from the media. Or it might be that he is single at present and is more focused on establishing his career.

Nevertheless, Dom Brack’s relationship status is unknown, and is single.

Who is Dom Brack?

Dom Brack is an American actor and an Internet personality. He is a well-known content creator, dancer, and Youtuber.

He grew up with his older sister, Arianna. Dom’s father’s name is Andrew Brack and likely, his mother’s name is Katy Brack, who is a painter.

He is of American citizenship and belongs to German and English ancestry.

He completed his education at the Orange County High School of the Arts and then studied acting.

Dom started his career at a young age when he was just 10 yrs old. He debuted in acting playing a role in a production of A Christmas Carol. Later he was signed with Central Artists.

Dom then started making different videos and sharing them on TikTok from September 2018. He is well known for his comedy clips, pranks, and lip-sync videos. The star also frequently collaborates with fellow TikTok stars such as Ashley Wicka and Zachary Ryan.

Furthermore, Dom is also an ambassador for the app named MashDay. He was part of the GenZ Social Summit and attends it with other social-media influencers including Life with MaK (Makenna Kelly), Connor Dean, and Jax Malcolm.

Additionally, he is a member of a digital content studio Amp Studios. They collaborate with online content creators and creates various interactive and eye-catching advertising/promotional campaigns.

The TikTok star launched his self-titled YouTube channel, Dominic Brack, on July 13, 2014. He uploads various vlogs, pranks, dares, and challenges, on his channel. The first video he uploaded was “SPRING BREAK VLOG” posted on April 25, 2018.

Some of his popular videos include BEN CAUGHT ME AND LEXI DOING THIS…, SURPRISING BEST FRIEND WITH CELEBRITY CRUSH (Madison Beer), and I SPENT THE NIGHT IN MY FRIENDS HOUSE & THEY HAD NO IDEA… (24-hour challenge).

Just in 2020, he starred in a main role in the music video for singer Jenna Davis’s song Under the Surface.

Likewise, he has maintained a good profile regarding his personal and professional life. He has never been involved in any type of rumors or controversies.

Likely, he has over 2M followers and around 40M likes on his TikTok account. Furthermore, he has his own YouTube channel named Dominic Brack with 581K subscribers.

Also, get to know about Jannat Zubair Rahmani, Awez Darbar, Heir of Atticus, and Suraj Sharma.

Chicken Connoisseur is not impressed with the UK government’s move to print anti-knife slogans on takeaway chicken boxes!