Domelipa is a Mexican star of social media platforms. She is currently in a relationship.

The present and EX lovers of Domelipa.

Domelipa’s relationship status is taken. She is dating a social media star whose name is Dekko who is also a singer.

They often share their moments on digital accounts. In Oct 2021, she posed with her boyfriend for a cozy photo session at Cartagena De Indias, Colombia.

This web star had several flings in the past few days. She for a brief time romanced with Rodrigo Contreras, Kevlex Pazmiño in 2020, Ílika Cruz, and Ralf Morales. 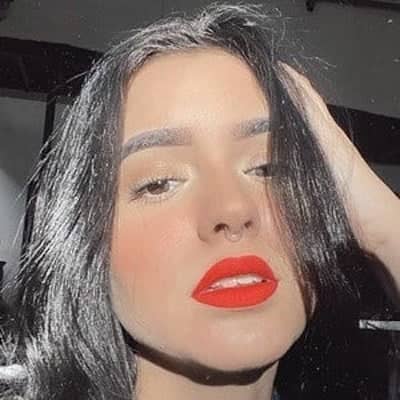 Domelipa is a Mexican star on social media platforms. Domelipa is known for her popularity on TikTok where she posts choreographed lip-syncs videos.

She was born in 2001 in Monterrey, Mexico, and celebrates her birthday on the 27th of August. Her real name is Dominik Elizabeth Reséndez Robledo and the name of her mother is Norma Robledo but her father is not yet mentioned.

She has featured her mon in one of her videos titled “Tag de la Mamá.”

Further, Domelipa’s ancestry is Mexican and has two brothers named Kevin and Gabriel. As per her academics, she studied from high school.

Domelipa is one of the eminent faces of the TikTok industry. Her lip-syncs and short vignettes of her everyday life posts are loved as well as adored by her over 49M fans. For her content, she has got more than 2.8 billion hearts.

Adding more, as an influencer runs a YouTube channel titled on her famous name where she uploads mostly reaction videos, challenges, and lifestyle videos for her admirer. The channel was created in June 2018 and it has now over 4.25 million subscribers.

Domelipa is present on several social sites with millions of supporters. On Instagram and Twitter, she has more than 16.7M and 73k followers respectively.

Also, her page on Facebook is not yet made.

She also earns from her website (shop section) by selling hoodies, T-shirts, joggers, masks, laces, mobile covers, and many more.

As of now, this star of TikTok is not surrounded by any rumors or scandals.

Domelipa has an average height is 5 ft 5 inches and her body weight is 60 kg. Furthermore, she has dark brown eyes and black hair.