Domhnall Gleeson is currently in a relationship. By the reports, he is living with his girlfriend whom he met at the Dublin Institute of Technology.

Her name is Juliette Bonass she is a producer by profession. 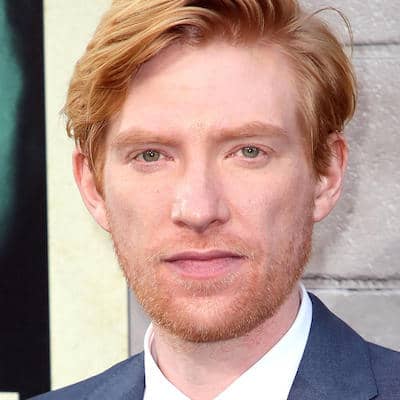 I'd been very certain about not wanting to do the acting thing because of my father. I thought I'd always have the father-son thing of 'He got you the part.'

Look at Cillian Murphy: 'Batman,' 'Tron'... those are some heavy-hitting franchises. But he works his way around it. He manages to have a great career and a great life.

Has anybody seen The Notebook (2004) and not cried? I don't know, I don't know if that's the case. It sort of hangs around for a while.

Who is Domhnall Gleeson?

He has directed two short films, Noreen, in 2010 and What Will Survive of Us in 2009. In the future, Domhnall will be seen in a TV Mini-Series titled The White House Plumbers.

He has also shown his acting talents in plays named The Lieutenant of Inishmore as Davey, American Buffalo as Bob, The Walworth Farce as Blake, Medicine as John Kane, and more.

His birth year is 1983 and the date he celebrates his birthday is May 12. He was born in Dublin, Ireland. The name of his mother is Mary and his father’s identity is Brendan Gleeson, an actor.

As per his academics, he completed his studies at Malahide Community School. After this, he then attended the Dublin Institute of Technology to study BA in media.

Domhnall Gleeson since his debut in 2001, was featured in several movies as well as TV shows. His first role was in Rebel Heart (TV Mini-Series) as Byrne

But the role that rose his fame was in movies titled Harry Potter as Bill Weasley, Star Wars: The Force Awakens as General Armitage Hux, About Time as Tim Lake, The Revenant as Andrew Henry, etc.

Domhnall’s other featured big-screen projects are,

Besides this, this amazing actor has small-screen roles in his bag. He was in shows titled Run as Billy Johnson, Frank of Ireland as Doofus, Your Bad Self as Various Characters, and The Patient.

By the sources of 2022, his net worth is estimated at $7 million. The yearly salary that Domhnall charges are under the rug.

This actor who played the role of Konstantin Levin in the film Anna Karenina, Domhnall is keeping himself away from scandals as well as rumors.

Domhnall Gleeson’s slender build body is of height is 6 ft 1 inch and his body weight is average.

Adding some more, he has blue eyes with red hair.