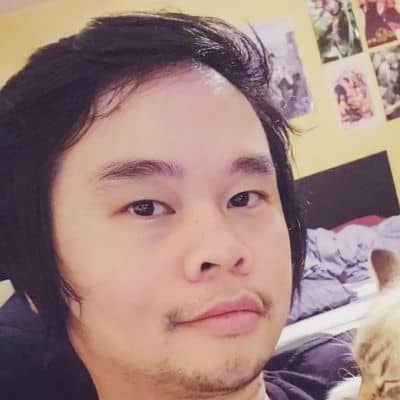 Reflecting on his romantic life, Domics is currently dating, a girl named, Claire, who is a Cosplay artist. The couple seems to be madly in love with each other.

Recently, on July 19, 2022, he shared a photo-taking selfie with his girlfriend.

Other details on how and when they started their relationship are yet to be disclosed.

He is well known for his flash animation and comedic videos on his popular Youtube channel titled, Domics.

The YouTuber was born on September 27, 1990, in Manila, Philippines. As of 2022, he is 31 years old, and though, he was born in the Philippines, he currently resides in Canada. So, he holds Canadian nationality.

Talking about his parents, his father, used to work as an accountant at one of the companies in South Arabia. Similarly, he is the second child of his parents and has two other siblings, one older and one younger sister.

Then, his family later moved to South Arabia due to his father’s professional reasons. Following that, they again moved to Canada.

Furthermore, heading toward his educational life, he completed his schooling at International Philippines School in AI Khobar. After completing high school graduation, he enrolled at Ryerson University and graduated with a bachelor’s degree in architecture in 2012.

As an architect student, he was always passionate about sketching and comics. Following his passion and Keen interest, Domics shared a webcomic on Tumblr in July 2010.

He even started to watch the content videos of OneyNG, Egoraptor, Swoozie, and Rooster Teeth Animated Adventures.

As of 16 August 2022, he has posted around 207 videos on his channel which has garnered over 1 billion views. Among all of his videos, his video titled, ‘CRUSHES’ is the video with the highest views at 32 million views as of August 2022. The video was uploaded on September 27, 2016.

Some of his famous YouTube videos are,  ‘Butts’, ‘Buying Used Things’, ‘Public Transit’, ‘My Art Teacher’, Ex Best Friend, and others.
His most recently posted video is titled, ‘BRB’ which has around 608K views. The video was uploaded on March 7, 2022.
Domics also own another YouTube channel, DUMBics, which was created on May 27, 2013. His YouTube channel has more than 7.38 million subscribers as of August 2022.

Talking about the cartoonist’s net worth, his net worth is estimated to be about $3 million as of 2022. Domics mainly earns from his YouTube career and he seemed to be getting immense love and support from his fans.

Till now, Domics has been able to stay away from any kinds of unnecessary rumors and controversy. The YouTuber has a clean and clear profile among the public and the media as well.

Domics has an average height and his body weight is of decent size. Adding some more, he has black hair with the same-colored eyes.

However, there is no information regarding his other body measurements like chest, waist, and hip size.

The social media star, Domics is active on social media platforms. He owns an Instagram account that is enriched with over 658K followers.

On the other hand, his Tiktok account has around 512K followers. There is also a Facebook page with his name, which has garnered about 282K followers.

As a Youtuber, he has two YouTube channels. His first YouTube channel, Domics has more than 7.38 million views. Likewise, his secondary account, DUMBics, is enriched with over 31.8K subscribers.