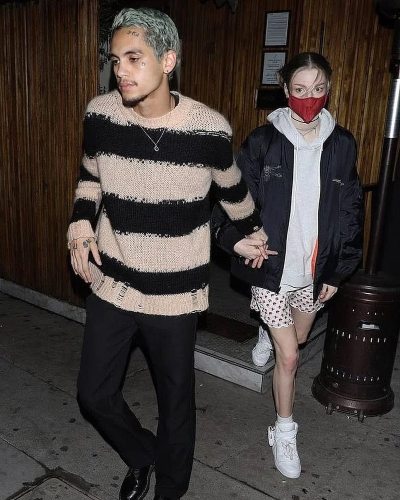 The two were recently caught up holding hands together on Saturday evening as they exited West Hollywood hotpot Nice Guy restaurant on January 16, 2022.

Hunter kept her look casual as she wore a black bomber jacket over a white hoodie. Similarly, she wore a flowy patterned skirt or shorts with a pair of her signature white sneakers and a red face mask.

On the other hand, Dominic wore a tan and black striped sweater, black pants, and black Doc Marten boots.

However, the duo hasn’t yet spoken anything about their relationship in the media.

Hunter, who portrays teen Jules Vaughn and Dominic portrayed the role of Elliot. Their characters are in a love triangle along with Rue (played by Zendaya) on the show.

The series is an adaptation of an Israeli show of the same name. The story of a group of high school students as they navigate love and friendship in a world of drugs, sex, trauma, and social media.

Dominic joined the Euphoria cast in the show’s second season. He made his first appearance in an episode, “Trying to Get to Heaven Before They Close the Doors” of the show.

The singer, Fike previously dated an actress Diana Silvers. In August 2020, he made his relationship official with Diana via IG video.

During an interview with GQ, Dominic talks about his the- girlfriend, highlighting her musical talents.

“She’s a f–king musical encyclopedia. She knows so many songs. There will be some crazy song from the ’50s playing in a f–king restaurant in New York, and she’ll be like, ‘Oh, this guy from this era and this album,”

“She likes old music, movies, and clothing. It’s influenced my music for the better.”

Also read “Joey King update! Who is the actress dating now? Know about her past relationship!”

Hunter Schafer is an American actress, fashion model, and LGBT activist. She came to the limelight after playing the role of Jules Vaughn in HBO’s hit series Euphoria.