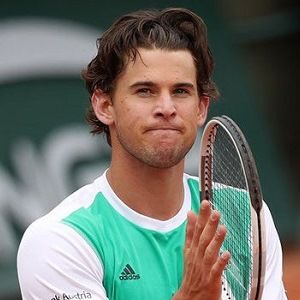 In the juniors, you are kind of a star, but just because you are a good junior doesn't mean you will be a good pro.

You always have to continue working, because everybody is. Once you stop, the others will overtake you.

You always have to continue working, because everybody is. Once you stop, the others will overtake you.

I don't mind to speak about myself until a certain point, but I think there's also the stuff which is for myself that nobody has to know.

Dominic Thiem is currently in a relationship with Kristina Mladenovic, a French tennis player. The couple has been together since 2017 and announced their relationship publicly in May 2018. They are supportive of each other’s careers and are often present at each other’s matches.

Who is Dominic Thiem?

Dominic Thiem is an Austrian tennis player who entered the ATP circuit early in his career. Following an impressive start in the juniors’ circuit with a World No. 2 ranking, Thiem turned professional in 2011. After winning his first title, he was identified by senior players and veteran journalists as a player to watch out for. Three ATP titles to his name in 2015 confirmed his graduation to the league populated by the best.

Dominic Thiem was born in Wiener Neustadt, Austria on  September 3, 1993, and he is currently 25 years old. His father’s name is Wolfgang Thiem and Karin Thiem. His parents are tennis coaches.

He was surrounded by tennis players at a young age and was coached by Gunter Bresnik since he was nine. As a junior player, he ranked at No. 2, won the Dunlop Orange Bowl, and attracted the attention of sports watchers.

He has a sibling namely, Moritz Thiem is also a tennis player. Dominic holds Austrian citizenship and Austrian ethnicity. His birth sign is Virgo.

Talking about Dominic’s education history, there is no information about his educational achievements.

Talking about his profession, Dominic Thiem started winning ATP events in 2013 and later qualified for the Australian Open’s main draw in 2014. He reached the second round in the Grand Slam but lost to Kevin Anderson. Later in the year, he qualified in the main draw of the ABN AMRO World Tennis Tournament.

Additionally, he qualified for many series in 2014, including the Sony Open Tennis, Monte Carlo Rolex Masters, and Barcelona Open Banc Sabadell. His breakthrough came at the Mutua Madrid Open when he defeated S. Wawrinka, the World No. 3, in straight sets. In addition, he also qualified for the Wimbledon and French Open in 2014 but lost to seeded players. He received his first seed in the Crédit Agricole Suisse Open Gstaad tournament but lost early in the series. Whereas, his next breakthrough came in his first US Open in 2014 when he reached the fourth round. However, he lost to Tomas Berdych.

During 2015, he lost in the first round of the Australian Open and didn’t make any progress in early ATP events. However, he earned his first title after winning the ATP World Tour title in France where he defeated Leonardo Mayer. In the remainder of 2015, Thiem continued to compete in Grand Slams. He reached the second round at the French Open and was seeded at the Wimbledon Championships. It was his first seeding in a Grand Slam, but he only reached the second round.

In the year 2015 Croatia Open Umag, he reached the final and defeated Joao Sousa to win his second title. Later, he also won the 2015 Swiss Open Gstaad and achieved a ranking of World No. 21. Towards the end of the year, with other tournament wins, Thiem was ranked at No. 18. During 2016, he reached the third round of the Australian Open. He impressed the world after defeating Rafael Nadal at the Argentina Open and later winning the title, which was his fourth. In February, he was ranked at No. 15 and was named the ‘Mover of the Week’ by ATP.

In fact, Thiem won the Mexican Open in February 2016 and climbed higher on the rankings’ chart. At the Italian Open, he defeated Roger Federer in the third round but lost later. He also holds an impressive record at the Davis Cup in Austria, where he played both Singles and Doubles. Besides that, Thiem defended his Nice title after defeating A. Zverev and earned another ATP title to his name. He reached the semi-finals at the French Open, his first in a grand slam. With these impressive performances, he entered the Top 10 and ranked at World No. 7.

In the year 2016 continued to be a bountiful one for Thiem. He won the Mercedes Cup after defeating Roger Federer and Philipp Kohlschreiber. At Wimbledon and the Austrian Open, he was stopped in the second round. Later, he started facing a knee problem and retired from the Rogers Cup. Titles continued to elude him in the second half of 2016. He reached the fourth round of the U.S. Open and the final in Metz but didn’t win.

He was ranked at World No. 8 at the end of the year. In the year 2017, he reached the fourth round of the Australian Open. Later at the Rio Open, Thiem won another title after a dry spell and clinched his eighth ATP title. As a defending champion at the Mexican Open, he lost in the quarterfinals to Sam Querrey.

At the 2017 French Open, he reached the quarterfinals; at Wimbledon and the US Open, he reached the fourth round before losing to his opponents. Towards the end of the year, his struggle with form continued. Despite that, he rose to World No. 4 in the rankings. He began 2018 with a fourth-round exit at the Australian Open. However, he managed to win the Argentina Open in February, thus ending the speculations over his poor form. Until the French Open, Thiem had missed many tournaments owing to his ankle injury.

He started off the clay season strongly in June. In Lyon, he won his 10th ATP title after defeating Dusan Lajovic. He also began the French Open strongly and defeated Stefanos Tsitsipas, Matteo Berrettini, Kei Nishikori, Alexander Zverev, and Marco Cecchinato to reach the final. Despite losing in straight sets to the clay king, Thiem left a mark and impressed the audience.

Moreover, he reached the quarterfinals of the US open in December 2018, where he met Nadal. Therefore, Thiem began his 2019 season with an early exit from the Australian Open due to injury. However, he hopes to return with a bang. Thiem’s resilient victories over the biggies in tennis have earned him fame and recognition. Many speculate that he could become World no. 1 in the coming years.

Dominic Thiem has 11 ATP world titles to his name and his current ATP ranking is 8th in the world. His best achievement so far was reaching the final of the 2018 French Open. He continues to consistently remain among the Top 10 seeded players in the world.

He has an estimated net worth of around $5 million earned from his professional career. Whereas he has a few sponsors backing him, but he is young and will surely gain more as his career progresses. The few brands that sponsor him are Adidas, Babolat, Bank Austria, Kia, and Rolex.

In addition to that, his victories on the ATP tour have earned him almost $11 million in terms of prize money.

This player has maintained his celebrity status and has not been involved in any types of rumors and controversies in his personal and professional life.

Dominic Thiem has a height of 6 feet 1 inch. Additionally, he weighs is 82Kg. In addition, his chest, waist, biceps sizes are 41-14-32 inches respectively. Dominic’s hair color is brown and his eye color is blue.

Also, read the affair, salary, the net worth, controversy, and the bio of Tommy Haas, Sue Barker, Rod Laver