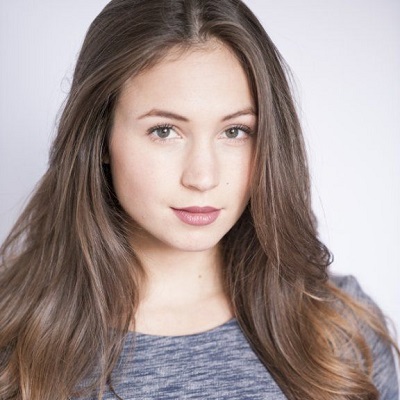 "And as much as this is an incredibly important story to tell, what I love is that, because it’s all so mad [in Purgatory], and we’ve got so many things to address, we don’t have time to spend every waking minute with each other in this sort of honeymoon period, because we’ve got things to do. You just see two women working out how they’re going to be a team, and it’s not necessarily going to be easy, because these two women are having to deal with a hell of a lot, and I think that’s really interesting.'' "It's just as much of a shocker for me as it looks like on paper. I was in the U.K., minding my own business when this project cropped up, and it really stood out to me."

She has been appreciated for her performance of queer character by the LGBTI viewers in the series.

Born on 24 March 1990, Dominique is currently 30 years old. She was born in Bristol, England. Details about her father and mother are not disclosed. she belongs to English ancestry.

Dominique Provost-Chalkley first worked as an understudy for Dirty Dancing which was a theatrical adaption of a hit movie. From Dec 11, 2012, to June 29, 2013, she played Holly in Viva Forever, a jukebox musical inspired by the famous singing group, Spice Girls.

In 2015, Dominique played Zrinka in the Hollywood blockbuster film Avengers: Age of Ultron. She has appeared in the hit movie The Carmilla movie (2017) and The Seasoning House (2012).

She is the winner of the Canadian Screen Awards for Audience Choice Awards, 2019.

Dominique’s net worth is around $500,00 as an actress. With her booming popularity and acting career, it’s sure to increase her earnings more in upcoming days.

With her increasing achievements in entertainment, there is also an increase in her popularity. Dominique has around 239K followers on Instagram and 106K followers on her Twitter.

In 2018, she started her own youtube channel entitled Start The wave which has around 18.4K subscribers.

She loves shopping for designer clothes, make-up items, and gadgets. Engaging herself in charity and donations is something she loves to do in leisure.

She learned the habit of carrying snacks from her mother. Like her character Waverly Earp, she is a Vegan too. She is fluent in both English and french. As a child, she loved Roald Dahl’s books.