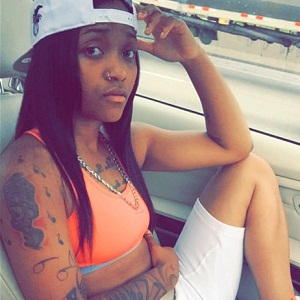 Domo Wilson is an unmarried woman. There is nothing published regarding her relationship status on any social media sites but she opened up on being gay. She said she was attracted to girls since school days. The first person she confessed to her sexuality is her mother.

In July 2015, she announced that she was planning to be pregnant via- sperm bank, not through relationship. Later, she revealed that she has a miscarriage.

Who is Domo Wilson?

Domo Wilson is an American social media artist who is mainly popular as a YouTuber and blogger. She has her own YouTube channel named “Domo Wilson”. She also works for a collaborated channel named “Domo and Crissy” and “Domo and Crissy Vlog” along with friend Crissy Danielle. She had a habit of doing a lot of fun and was entertaining from a very early age. There is no factual information published relating to her educational background.

Wilson was born to American parents on June 24, 1994, in Chicago, Illinois, United States. Her nationality is American and is of African-American ethnicity.

She was raised up with her parents in a friendly and entertaining environment along with her four brothers and one sister. Her younger brother’s name is Michael and he was born in the year 2016. Her parents moved to Valparaiso, Indiana and she was grown up there.

There is no information published regarding her educational background.

Wilson started her career as a social media artist. In the year 2010, she created her own YouTube channel and started making funny videos, vlogs, and cover songs. She was popularized among the public in the year 2014 when she started doing short videos.

The audience mainly loves her energetic and hilarious performance.  She is also a singer and songwriter. In the year 2015, she started singing cover and her own songs too and gained more popularity and fame. Her videos include day-to-day reactions, teens problems, student problems, and much more. She again created two YouTube channels collaborating with her closest friend Crissy Danielle. Besides YouTube, Wilson performed live music all over the United States of America. They have a total of more than three million subscribers together and have the highest views of 4.4 million. They both make a handful amount of money from YouTube.

Domo Wilson: Salary and Net Worth

Domo is constantly plagued with gay rumors. After her post regarding being pregnant via a sperm bank, she became part of a rumor on social media. This rumor seems to be false and should be investigated to find the truth behind it. Also, she hasn’t been a part of the controversy yet.

Domo has black hair and dark brown eyes. She has a height of 5 feet 6 inches tall and weighs 55kg. Furthermore, there are no details regarding her body measurements.

Also know more about the early life, career, net worth, relationships, and controversies of other YouTuber and bloggers including Clara Henry, Sam Pepper, Jamie Curry, Zoe Sugg, and Jim Chapman.