Don Benjamin is an American model featured in America's Next Top Model. Don is engaged to an internet sensation Liane Valenzuela. 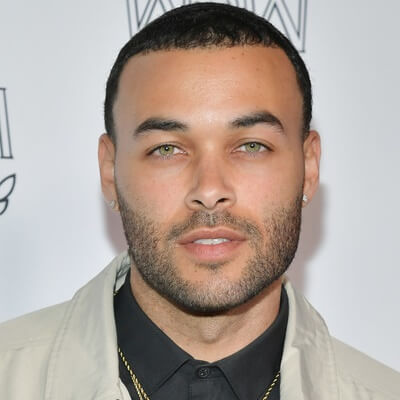 Benjamin is currently married to TikTok star, Liane Valenzuela. On August 23, 2019, on the occasion of Liane’s birthday, Don proposed to her and they got engaged.

On January 31, 2020, they uploaded a video saying they have decided to take a break from the relationship.

The couple started dating in 2015 and on 24 Aug 2021, they exchanged vows. Their wedding took place in Hawaii where the Bride wore a white lace wedding gown while the Groom wore a traditional tux.

He and his wife have a YouTube channel called ‘Forever Us’ in which they document the progress of their relationship.

They started the channel in November 2017. As of 2020, the channel has 185k subscribers and their videos have reached total views of 8.7 million.

Who is Don Benjamin?

Don Benjamin is an American model, TV personality, and musician. He was a finalist on the twentieth season of ‘America’s Next Top Model‘, and the winner of ‘Scared Famous‘.

Don Benjamin was born as Donald Benjamin in the South Side neighborhood of Chicago, Illinois, on May 5, 1987. He was born to parents Joseph Thottumkal (father) and Seline Thottumkal (mother).

He also has a sister, Brooke, and is very close to her.

The part of Chicago where he grew up is famous for its crime, poverty rate, and gun violence. However, he did not get involved with all these as he and his mother moved to Florida. After that, they moved to Mississippi, and then to Minneapolis, Minnesota.

For education, he went to Brooklyn Center High School. He was the captain of the high school varsity basketball team.

Don Benjamin moved to Los Angeles in 2005. He started his career as a model. He got his breakthrough in 2013 when he landed a spot as a contestant in the twentieth season of ‘America’s Next Top Model’.

Benjamin made it to episode 12 and got eliminated. In the overall standings, he finished eighth. His demand increased after that and he got the opportunity to model for brands like Guess, Tillys, and Pink Dolphin.

In 2017, he joined the cast of the debut season of the horror reality series, ‘Scared Famous’. He won the series and donated the $100,000 prize money to the Peace over Violence charity organization.

He also put his knowledge and passion for music which he had developed from a young age to good use. In 2012, he collaborated with Photronique on her song, ‘Across the sky’. The same year, he released his debut single ‘Real’.Throughout the years, he released several songs, such as ‘Jealous’, ‘Tonight’, ‘Touch My Body’ and ‘Hit the Snooze.’

She also appeared as Nathan in the thriller film ‘Matthew 18’ the same year. Some of his other acting credits include ‘Supermodel’, ‘3 am in Hollywood’, ‘Bunny and Clyde’, and ‘Judgment’.

How much is Don Benjamin Worth?

As of 2020, Don Benjamin has an estimated net worth of around $20 million according to some notable online sites.

The American model stands at a height of around 6 feet 1 inch and weighs around 85 kg.

His body measurements for chest, waist, and biceps are 42-33-15 inches. His hair color is black and he has a pair of beautiful green eyes.

Moreover, he has inked tattoos all over his body.

He appeared in the music video of pop star Ariana Grande’s ‘Into You’. In the video, he is featured as her lover. This made fans speculate that the two might have been a ‘thing’. Rumors started circulating about the two dating each other. However, he denied the rumors.

Don has not been involved in any controversies. He has been able to keep himself away from any type of controversy and scandal. So far, he has not done anything controversial in his career.

Bella Thorne and her Italian singer new boyfriend Benjamin Mascolo debut on the red carpet at Joker premiere at Film Festival in Venice!