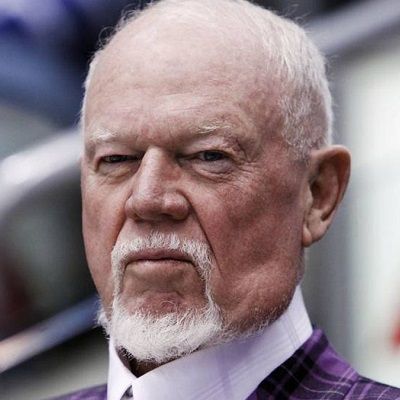 What I said was if you're wearing a visor and you're going for safety, OK, But don't go around being a tough guy

I think the people, the working-man people, made a statement here, that you don't have to be a college graduate to be a good Canadian

To run up a score like that, that is wrong, first of all it is not the Canadian way.

The relationship status of Don Cherry is married to Luba Cherry since 1999.

Previously he was married to Rosemarie Cherry from 1957 and had two children- Tim and Cindy Cherry. Unfortunately, Rosemarie passed away in 1997 after she lost her battle to liver cancer.

A street along the Hershey Centre in Mississauga, Ontario, is located on “Rose Cherry Place”, a street that was named in honor of Don’s late wife, Rosemarie Cherry.

Who is Don Cherry?

Cherry has been a longtime supporter of the Police Services. On November 14, 2005, he was granted the Honorary Membership of the Police Association of Ontario.

Don Cherry is a commentator, a retired professional ice hockey player, and a National Hockey League coach. In 1953, Cherry won the Memorial Cup as a defenceman.

Dan is involved in charities and is a philanthropist.

His parents are Delmar and Maude Cherry and they belong to the Anglo-Saxons race. Mr. Cherry was an electrician with the Canadian Steamship Lines.

His paternal grandfather, Sub/Cst. John T. Jack Cherry was the original member of the North-West Mounted Police, also known as Royal Canadian Mounted Police. He was also the Captain of ship ‘Great Lakes’.

Cherry played junior hockey with the Barrie Flyers and the Windsor Spitfires in the Ontario Hockey Association. In 1954, Cherry dropped out of high school and signed with the American Hockey League’s, Hershey Bears.

In the 1971-72 season, Cherry became the coach of American Hockey League’s Rochester Americans.

After his three-year in Rochester, he was promoted to the NHL as head coach of the Boston Bruins. Cherry’s team had a successful run of two Stanley Cups and three first-place finishes.

In 1979, Cherry went on to coach the Colorado Rockies. Cherry’s NHL career ended on a positive note when they defeated the Pittsburgh Penguins 5–0 in the final game of the season.

In 1981, CBC hired Don as a Color Commentator. He didn’t last long in that role due to his tendency to openly cheer for one of the teams, especially the Boston  Bruins or Toronto Maple Leafs.

In the 1980s, Cherry hosted his own half-hour interview show, Don Cherry’s Grapevine. In the 1987–88 NHL season, he also hosted the weekly television show Don Cherry’s This Week in Hockey.

From 1984 to 2019, Cherry co-hosted Don Cherry’s Grapeline with Brian Williams. The show was aired over 100 stations across Canada and on several stations in the United States.

Cherry created the Don Cherry Pet Rescue Foundation. He donates all his profits to animal charities.

On November 14, 2005, Cherry was granted Honorary Membership of the Police Association of Ontario.

In 2004, he ranked at number 7 on the CBC’s miniseries The Greatest Canadian.

Don’s net worth is $14 million USD. His earnings as a commentator is $32k US.

Don has light hair and blue eyes. His height is 5 ft and 10 inches and his weight is 82kg.

You may also like to read about Patrice Bergeron, Colton Parayko, Brett Hull.

Coffee lovers! 5 best coffee in the world and find out where can you get it