Don Diamont is an American actor who appeared in The Young and the Restless. Don is married and a father of six. 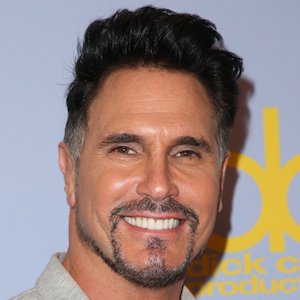 Don Diamont is a married man. He is married to Cindy Ambuehl on June 12, 2012, the couple has twins namely, Anton Diamont, Davis Diamont

Previously, he was married to Rachel Braun in 1994, the couple has four children namely, Lauren Diamont, Sasha Diamont, Alex Diamont, Luca Diamont. However, things did not go well afterward and they decided to separate in 2002.

Who is Don Diamont?

As an American actor, Don Diamont is known best for his role in the movies The Young and the Restless as Brad Carlton and in The Bold and the Beautiful as Bill Spencer, Jr.

Don Diamont was born in New York City, the United States on December 31, 1962. His birth name is Donald Feinberg, and he is currently 58 years old. His father’s name is Albert Feinberg and his mother’s name is Judy Feinberg.

He has three siblings, two sisters and a brother, named Bette, Elena, and Jack. Whereas, his sister Bette died in 1998 while his brother Jack died in 1989 due to cancer. He holds American citizenship and Ashkenazi Jewish ethnicity. His birth sign is Capricorn.

Talking about his education, he attended Brentwood School, East Campus.

Talking about his profession, Don Diamont start out his career as a model. Eventually, he chose his mother’s maiden name in his professional journey to make it catchier among the people and turned to Don from Donald Feinberg. He continued to model and one day he was offered to work on the TV screen.

Don Diamont’s first major acting break came in 1984 to work on Days of Our Lives as Carlo Forenza. He remained in the show for a year. Additionally, he was also a cover model for Playgirl magazine twice, in 1988 and 1995.

Besides that, he is active with the National Multiple Sclerosis Society and has a niece afflicted with the illness. In fact, he was in 1995’s Sure Ultra Dry commercial campaign.

In 2018 he took part in the cast of the talent show conducted by Milly Carlucci, Ballando con le Stelle (the Italian adaptation of Strictly Come Dancing / Dancing with the Stars)

There is no information regarding his income, salary. But, his net worth is estimated to be around $4 million according to the sources.

There was a rumor that Diamont is leaving “The Bold and the Beautiful”. Currently, he is far from rumors and controversies.

Don Diamont has a height of 6 feet 1 inch, and his weight is 70 kg. Diamont’s hair color is black and his eye color is hazel.

Also, read the affair, salary, the net worth, controversy, and the bio of Mekhi Phifer, Winsor Harmon, Barbara Crampton

Bradford Anderson
Tags : American Actor The Bold and the Beautiful The Young and the Restless as Brad Carlton
Suggest Bio Update