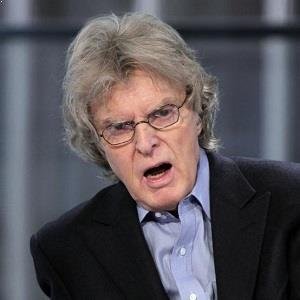 I regret the times I've been mean to people... It's fine to pick on people who can defend themselves and deserve it. Some people don't deserve to be picked on who I picked on, so I don't do it anymore

I talk to millions of people every day. I just like it when they can't talk back.

What is the relationship of Don Imus?

Don Imus has been married twice. His first wife was Harriet Showalter. They got married in 1969.

After staying together for over a decade, he divorced his first wife in 1979. He had two daughters named Ashley and Elizabeth from his first marriage.

He got married for the second time to the American actress, Deirdre Coleman on December 17, 1994. They together had a son named Frederick Wyatt, born on July 3, 1998.

They have been together for over two decades and there is no sign of divorce at all. There are no other records of his past and present relationships.

Who is Don Imus?

Don Imus was an American radio host, humorist, and landscape photographer. He has also established himself as a famous philanthropist and writer. He is best known as the host of Imus in the Morning.

Don Imus was born as John Donald Imus Jr. on 23 July 1940, in Riverside, California, United States. Don holds an American nationality and is of English ethnicity.

He was the elder son of Frances E and John Donald Imus, Sr. He has a younger brother named Fred Imus who is also a famous talk show host in America. He grew up near Kingman, Arizona with his family.

He worked as a rail transport worker on the Southern Pacific Railroad before fame. He also served in the United States Marine Corps from 1957 to 1960.

Imus was recognized as having stage 2 prostate cancer in March 2009. On December 24, 2019, he underwent treatment at Baylor Scott & White Medical Center in College Station, Texas.

He experienced complications from lung disease and passed away three days later, on December 27, at the age of 79.

He had not revealed any information about his educational background.

Don began his career as a singer and songwriter after winning a talent contest at Johnny Otis’s nightclub. After that, he began working as a radio disc jockey on June 28, 1968, at radio station KUTY in Palmdale, California.

He left KUTY for another job at KJOY, a small radio station in Stockton, California. After that, he moved to New York City and began working at WNBC radio in December 1971.

Imus had won four Marconi Awards till now. He was named one of the 25 “Most Influential People in America” by Time magazine in 1997. He was inducted into the National Radio Hall of Fame in 1989.

In 2002, Talkers magazine named him as one of the “25 greatest radio talk show hosts of all time”.

Don Imus: Salary and Net Worth

He had a net worth of  $75 million but his salary is not revealed yet.

Was Don Imus involved in any rumors?

There was no rumor of him dating anyone at the present time.

On April 4, 2007, Imus characterized the Rutgers University women’s basketball team players as “rough girls,” commenting on their tattoos for which he was criticized by the players and audience.

How tall was Don Imus?

Don Imus had a height of 6 feet 2 inches. His body weight was not known. Furthermore, he has salt-pepper hair and hazel eyes.