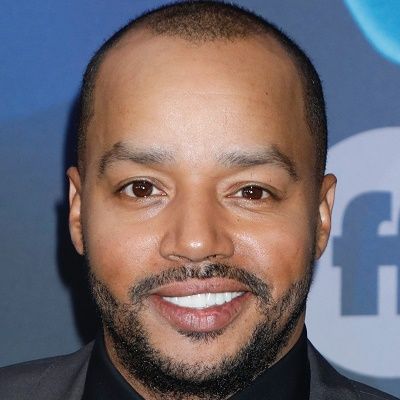 I've got the youngest one right now

she's got a lemonade stand going. But it's really crazy, 'cause she can't really talk or hold her body up because she's only six months, so nobody sees her sitting behind the table. But hey.

Donald Faison is a married man. He exchanged his vows with CaCee Cobb, on December 15, 2012. Their wedding was held at the house of Faison’s best friend Zach Braff, who also served as a groomsman.

Donald has a son Sean, born in 1997 with ex-girlfriend Audrey Ince.

Who is Donald Faison?

Donald Faison is an American actor, voice actor, and Comedian. He is best known for his role as Dr.Chris Turk in the NBC comedy-drama Scrubs.

This actor was born on June 22, 1994, in New York, the United States with a birth name Donald Adeosun Faison. His father’s name is Donald and his mother’s name is Shirley.

He is the brother of singer Olamide Faison and belongs to All-American descent.

Earlier in 1991, Donald Faison appeared in a commercial for Folgers coffee. The following year, Donald appeared in the ABC News special ‘Prejudice: Answering Children’s Questions‘. He had a small role in the 1994 crime film ‘Sugar Hill‘. The next year, he starred as ‘Murray Duvall’ in the film Clueless from where he gained huge popularity. Donald used to work as a lifeguard.

Faison also made his appearance in ‘Waiting to Exhale’,’Big Fat’,’New Jersey Drive’,’Felicity’, Remember The Titans. In addition to acting, he provided voice work for various characters in the MTV animated series ‘Clone High’. He has also appeared in Gavin DeGraw‘s music video ‘Chariot‘.

This actor also had minor roles in the sitcoms ‘Sister, Sister‘, and ‘Sabrina, the Teenage Witch’, and the movie ‘Josie and the Pussycats’.He produced one episode of MTV’s Punk’d in 2005.

The salary of this actor is pretty impressive. Donald made a salary of $75 K per episode on Scrubs. Meanwhile, according to some sources, he has an estimated net worth of $12 million.

Faison opens up about being judged by his skin color. He once drunkenly gave Jeff Zucker a noogie.