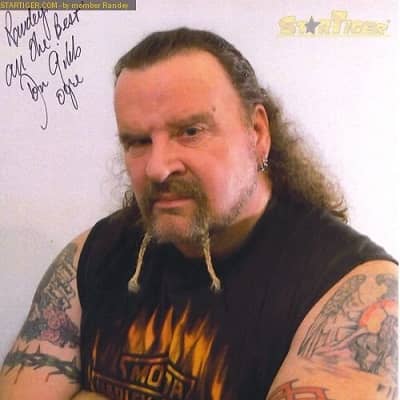 Donald Gibb is currently married to his wife Jacqueline Bauer. The two got married in 1981 in a private ceremony attended by close family and friends. While the couple is really secretive about their married life, we can see them together in a number of events. The couple has also shared that they have one child together. However, they haven’t shared the name or any other personal details of their child.

Donald hasn’t shared any information about his previous relationships and girlfriends as of now.

Who is Donald Gibb?

Donald Gibb is a popular American actor. He is best known for his roles in the Revenge of the Nerds film series and in the HBO sitcom 1st & Ten.

He hasn’t been very active nowadays and his last film role was in Hancock back in 2008.

Donald Richard Gibb was born on the 4th of August, 1954 in New York City, New York, USA. As of now, his age is 67. His nationality is American and his ethnicity is Caucasian.

Gibb hasn’t shared any details regarding his parents, not even their names. He also hasn’t shared anything about his siblings, so he might be a single child. Still, he has shared that he grew up in California and has a passion for sports and bodybuilding growing up. He also played and was quite good at both basketball and football.

Gibb attended and graduated from Notre Dame High School in California. Then, he went to the University of New Mexico on a basketball scholarship and joined the Phi Delta Theta Fraternity. While studying there, Gibb suddenly changed his mind and transferred to the University of San Diego. He played basketball for them on scholarship and was on track to become an athlete in the future. But unfortunately, he suffered an automobile accident and switched his focus to acting.

Donald Gibb started his career with small uncredited roles in Stripes and in Conan the Barbarian. Gibb had built a distinct and impressive muscular physique by this point. This made him more distinct in his minor roles as big strong guys in movies. And soon enough, one of his minor roles as an ex-convict in Lost in America helped him gain a lot more recognition. Then, in the 1980s Gibb portrayed an Ogre Character in the comedy movie Revenge of the Nerds. This is his best-known performance to date and many fans loved his character in the movie.

Gibb would return to portray the character in the sequels Revenge of the Nerds II and in Revenge of the Nerds IV. Donald is also well known for his recurring role in the martial arts movie Bloodsport and its sequel Bloodsport II. He portrayed Ray Jackson and worked with Jean-Claude Van Damme in these movies. Gibb’s other notable roles include Jocks and Amazon Women on the Moon. Along with movies, Gibbs has also appeared in a number of TV shows. His notable works here include Daddy Dearest, 1st and Ten, The X-Files, The A-Team, and Magnum P.I. among others. Aside from his work in film and Tv, he is also a co-owner of Chicago bar Trader Todd’s. Through this, he is also marketing his own brand of beer named Ogre Beer.

Gibb has accumulated an impressive net worth that is estimated to be about 4 million USD. He hasn’t shared any details regarding his annual salary though.

Gibb stands at a height of 6 feet 4 inches tall and his weight is roughly 130 kilograms. He has built a massive and muscular physique over the years which makes him look intimidating. Gibb’s hair is and eyes are both brown in color.

Donald prefers keeping a low profile and so, he isn’t active on any social media platforms. While there are a number of accounts with his name, many are fan accounts and haven’t been verified.

Get to know more about the lives of Neil Flynn and Quincy Fouse as well.