(Executive in theTrump Organization Former boardroom judge of The Apprentice) 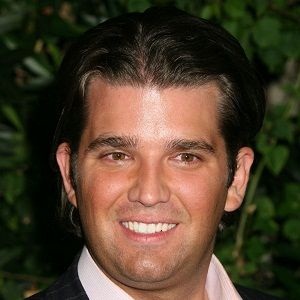 Donald Trump Jr. had married Vanessa Kay Haydon and got five children together: two daughters Kai Madison, Chloe Sophia and the 3 sons Donald John III, Tristan Milos, and Spencer Frederick. But their relationship could not last long and got divorced in 2018.

Who is Donald Trump Jr.?

Donald Trump Jr is the eldest son of the 45th President of the United States, Donald Trump. His father is an American former reality television personality, and businessman.

He is known for promoting various conspiracy theories.

Donald Trump Jr. was born to Donald J. Trump and Ivana Trump on 31 Dec 1977 in Manhattan, New York City U.S.A.  His father worked as a front-runner of the republication in 2016 US the presidential election and real estate developer whereas her mother a fashion model.

His father Donald J. Trump was the President of the United States and a world successful businessman. He has got younger siblings Ivanka, and Eric. Also, he has got two sisters and brother from his step-mother Tiffany and Barron.

Trump Jr. also need to encounter reporters who asked him about his parents’ widely publicized divorce during his childhood. Thus, Ivana Trump sent them to boarding school to protect her children.

Trump Jr studied in The Hill school and completed his B.S. degree in economics from the University of Pennsylvania’s Wharton School.

Trump Jr. started hunting, fishing, skiing, and working as a bartender for a year in  Aspen, Colorado before returning to join the Trump Organization in New York after being graduated from Penn in 2000.

Trump supervised in building the projects that included 40 Wall Street, Trump International Hotel and Tower, and Trump Park Avenue. He also appeared on many episodes of his father’s reality television show The Apprentice, from season 5 in 2006 to his father’s last season in 2015 as a guest adviser and judge.

Trump Jr. was busy campaigning for his father during the 2016 presidential campaign. He was also characterized as “a close political adviser to his father” by  The New York Times. Trump Jr. was reported influencing his father’s choice of Secretary of the Interior Ryan Zinke by the Wall Street Journal and Politico in December 2016. Currently, Donald Trump Jr. is engaged as Executive Vice President of the Trump organization.

There are no any records available at the current time regarding his achievements and awards.

The net worth of Trump Jr. is estimated to be $275 million. But his salary and other earnings are unknown.

There are no any records available at the current time related to his rumors and controversy.

Trump Jr is 6 feet 1-inch tall with a white and smart personality. He has dark brown hair and light brown eyes.

You may also read the bio of Steve Wilkos, Lindsay Shookus, and Julie Etchingham.