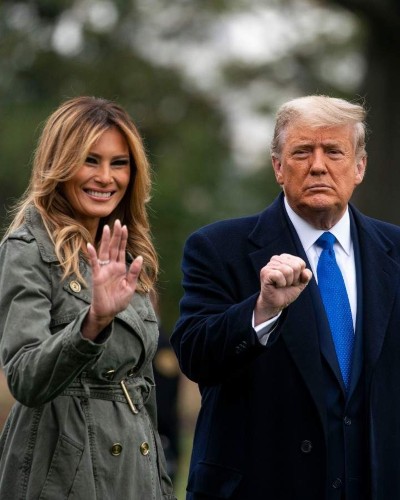 Donald Trump has been accused of infidelity while he was in the White House. In the upcoming book, I’ll Take Your Questions Now Stephanie Grisham had addressed some of his scandalous allegations. He was trying to get the attention of a young female staffer and was obsessed with the unnamed female press aide.

As per Yahoo, he was constantly asking about her whereabouts so that he could look at her and asked for her to be brought into his Air Force One Cabin. Trump is not a fan of Stephanie Grisham and has already denounced the soon-to-be-published tell-all. He claimed that Stephanie was paid by a radical left-leaning publisher to say bad and untrue things.

How is Melania Trump doing?

Melania Trump has a perfect way to get back at Donald as she walked arm in arm with a handsome military man as her escort to the 2018 State of the Union. Since the allegations on Donald have surfaced, Melania is taking subtle digs at her husband and has been excluding him from photographs and social media posts.

For being taken to the big events, Mrs. Trump choose her company as a handsome aide which might be her way to get back at Mr. Trump.

Also read Has the relationship of Melania Trump and Donald Trump deteriorated? Her body language says so!

Donald was the president of the United States, before entering politics. Donald is also a businessman and television personality.

He was defeated for the US President in the 2020 election against Joe Biden. Read more bio…