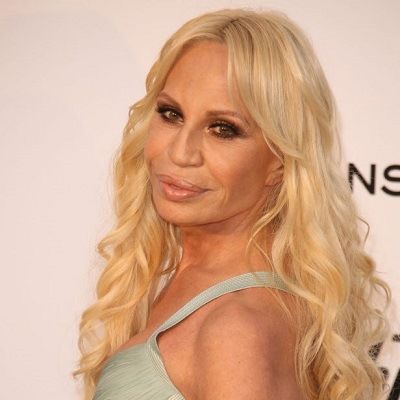 You can't pretend that everybody likes Versace. It would be boring. It's better to create a reaction than to create no reaction. That's dangerous.

I have an image of what a British gentleman looks like, and that image finds real expression in Prince Charles. He is beyond fashion - he is an archetype of style.

Some say the economy means that you have to persuade people to invest in clothes - to buy less things but more expensive things. I disagree - invest in jewelry, or a house, maybe, but not in fashion.

Their marriage, however, collapsed in the year 2000. After this, Donatella got married to Manuel Dallori in 2004 but they parted ways in 2005. As per now, she is single.

Who is Donatella Versace?

Donatella Versace is a chief creative officer of Versace and fashion icon designer, a division of Capri Holdings. Likely, she is the sister of Gianni Versace, who died in 1997 and he founded what has now become a family business. Donatella’s initial knowledge about designing came from her mother who was involved in dressmaking.

Talking about Donatella’s education history,  she enrolled at the Florence University in Italy to pursue languages. She was very close to her brother Gianni who encouraged her passion for fashion.

Talking about her profession, during 1979, Donatella moved to Milan to work with Gianni, first as a design assistant and later in the public relations department. She was the only person who could contradict her brother with her constructive criticism. She also plunged into the fashion world during the 1980s. Gianni launched a perfume ‘Blonde’, dedicated to her and gave her own diffusion label, ‘Versus’, which remains a well-known Versace inner line.

The assassination of Gianni in Florida in July 1997 devastated her, but she quickly recollected herself and took over as the chief designer. In October, she made her solo debut for spring the following year. In the year 1998, she mounted her first couture show for the Versace Atelier at H0tel Ritz Paris. She built her runway over the hotel’s swimming pool, like her brother, but this time using sheer glass.

Whereas, her first collection, attended by a host of celebrities, was a triumph. But in typical Donatella fashion, she credited its success to the seamstresses and models and dedicated the show to her late brother. The show became an annual event, with regular guests including Catherine Zeta-Jones,  Elizabeth Hurley, Elton John, and even Prince Charles. Additionally, she began to use well-known models for the catwalk shows, to generate press coverage.

In addition, several low-key receptions, however, did not deter her. She continued to manage earlier collections, but she believed that she could not just continue with what Gianni was doing. The company created the grand, luxurious Palazzo Versace resort on the Gold Coast of Australia while the Burj al-Arab, in Dubai boasts a broad collection of Versace furniture and beddings in its lavish rooms.

In fact, the plans for the Palazzo Versace Dubai were announced in May 2005. The Palazzo Versace boasts a number of suites and luxury villas, including an exclusive spa. As Creative Director, Donatella executed the final plans. During 2008, she was made the honorary chairman for London’s ‘Fashion Fringe’. The ‘Fashion Fringe’ was an initiative by fashion writer Colin McDowell and ‘IMG Fashion’ to support emerging designers.

In the year 2009, Donatella asked Christopher Kane, the Scottish designer, to revive ‘Versus’. The pair successfully revitalized the brand, making it a major player again on the ‘Fashion Week’ schedule. In November 2012, Kane departed from ‘Versus’ as the Italian fashion house planned to completely overhaul the label, ceasing the production of seasonal collections – with a renewed focus on digital.

Similarly, JW Anderson, an Irish designer was appointed to create a capsule collection for the ‘Versus’ label, as he’s well versed with the new digital world and therefore, an ideal partner for their new direction. She started using pop star Lady Gaga as her muse, and in October 2012, in a much-publicized visit, invited the pop singer to her late brother’s apartment in Milan.

Regarding awards and nominations, she has won Favorite Fashion Designer at MTV Asia Awards.

She has an estimated net worth of around $400 million (as per 2019 data) and she has earned that sum of money from her professional career.

Donatella Versace has a height of 5 feet 2 inches and she weighs 55Kg. Donatella’s hair color is blonde and her eyes color is green.