Donita Sparks is an American vocalist, guitarist, songwriter, and creative director. She is most notable for the cofounding of the band L7. She is possibly single. 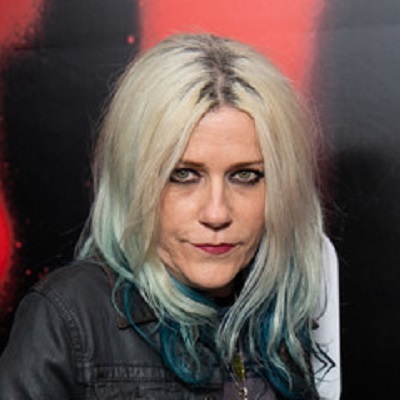 Donita Sparks is single as of now. She’s not currently dating anyone. In the past, Donita had had two affairs.

She was in a relationship with Viggo Mortensen, an American actor. They dated each other during the ’90s. However, the couple broke up.

After Viggo, she had an affair with Jeordie White/Twiggy, an American bassist. They also broke up after having an affair for some time.

Who is Donita Sparks?

Donita Sparks is a guitarist, songwriter, and singer. She rose to fame as a member of the grunge-era all-female rock band L7. Since then, she has continued to bring good noise as a solo artist.

Donita was born on April 8, 1963, in the Hyde Park of Chicago, Illinois. Her current age is 57. There is no information about her parents.

However, she has credited her father for cultivating her sense of rhythm at a young age, and her mother for installing equal rights. She has several sisters.

Her nationality is American. However, her ethnicity remains unknown. She has blonde hair and grey-colored eyes.

After her graduation from high school in 1981, she joined classes at the Community Film Workshop of Chicago.

In 1984, Donita Sparks met with Suzi Gardner and by 1985 they formed L7’s creative foundation. They both worked at LA Weekly and were active participants in the Echo Park / Silver Lake area art punk DIY scene when they began writing music together.

Recognized for subverting and transcending performers ‘ expectations in the late 80s and early 90s, L7 produced six original studio albums between 1985 and 2001. The work of Sparks was featured in films such as Natural Born Killers, Brokeback Mountain, Perks of Being a Wildflower.

As Donita and the Stellar Moments in February 2008, Sparks released her debut solo record Transmiticate. She is also the drummer for the Lou Reed tribute band, Lou Man Group. L7 reformed in 2015 and embarked on a reunion tour.

Sparks gave interviews reflecting on the group’s trajectory and discussing the band’s challenges and triumphs over the years. The band resumed a six-week national tour starting on May 10, 2019. Sparks ‘ guitar of choice is the deliberately angular Flying V that she described as “something from the Jetsons”.

Her net worth is estimated at around $1 Million. Her primary source of income is sourced from her music career.

While L7 played at the Reading Festival in 1992, they blew out their speakers. The crowd threw mud on the stage. Sparks threw her tampon back at the crowd in response and shouted “Eat my used tampon, fuckers!” she never apologized for the incident.

In 1992, when she dropped her pants on live TV during an L7 performance on the variety show The Word, Sparks created a stir in England.

Donita Sparks has an average height and weight. She has blonde hair and grey eyes.

Donita is not active on any social media platform. She is out of touch with the media and as well as the internet.