Donlad Dougher is an Internet personality. Donlad is having an affair with his girlfriend Indigo Star Carey.

The duo also posts various pics together and mentions each other as their partner. Just on Dec 5, 2020, Donlad has a post mentioning Indigo as his bae. The couple seems to have a good time happy spending time together. 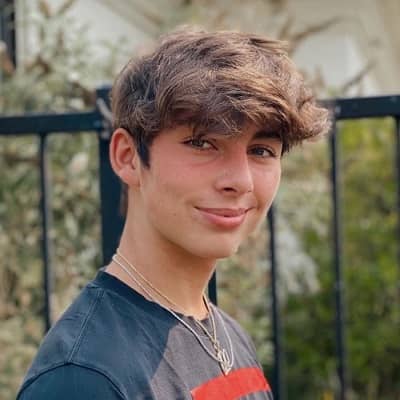 Who is Donlad Dougher?

Donlad Dougher is a well-known internet personality. He is popular for his YouTube content where he uploads lifestyle videos and pranks videos. He has built his career as a Youtuber and has amassed more than 606K subscribers on his channel.

Donald was born on July 16, 2006, in San Diego and later moved to Los Angeles, Unites States. He is of mixed ethnicity: Half Irish, Some Lithuanian & also Mexican. His full name is Donlad William Dougher.

Donlad mother’s name is Yvonne Dougher. She is the owner of Out of the Closet Boutique. And likely his father, Don Dougher is a real estate businessman who owns apartment complexes in Arizona, California. His parents get divorced and lives separated.

Donlad has an older sister. He has also featured his family members on his YouTube and TikTok channel.

Donlad finished his schooling at a private college. And now, he is homeschooled to forward his Youtube career. Donald loves playing different sports. He has played tennis in his school days and was also on the school tennis team.

Donald launched his Youtube account, DONALD on Aug 9, 2019. And he posted his first video on 14th Aug 2019. He posts various lifestyle vlogs, challenges & pranks videos, and similar kinds of stuff on his channel. Moreover, he also makes videos with his friends and family. The star often collaborates with other popular YouTube stars like Tanner Fox, Piper Rockelle, and the Funk Bros.

His fans are known as #Ladiators. One of his most-viewed YouTube videos was entitled, “I Got FAZE RUG The CRAZIEST Gift… which features him giving Faze Rug a Rolls Royce. It has accumulated 1.1M views as of now. Similarly, his other popular videos on the channel are “MEGA MANSION HIDE N SEEK! FAMOUS Youtubers…”, “WE WENT HOUSE SHOPPING!!! CRAZY MANSIONS! | DONLAD”, “A DAY IN THE LIFE OF THE RICHEST KID IN AMERICA!!! (QUARANTINE EDITION)”, and others.

Furthermore, Donlad has established his career as a popular internet sensation and an influencer. He has recently shared in his videos that he is going to start his own merch.

Donlad has been establishing himself as a Youtube and must earn from his videos and streams. The average salary of a YouTuber with 500k subscribers is around $28,600 annually. Hence, he also has good earning.

His net worth is still under review. The star is also planning to start his own merch and will also earn from it.

The star hasn’t been in any rumors and controversies. Yet he is one of the influencers trending on the internet and among the young generations.

Donald stands with a height of 5 feet 8 in tall and weighs around 57 kg (127 lbs). He is a fitness freak as well and has maintained his physique.

Talking about his facial appearance, He has dark brown eyes and blonde dyed into brown hair. Similarly, he wears a shoe size of 12 US.

You may also read the bio of Mia Hayward, Corey Scherer, Millie T, and Helen Anderson.