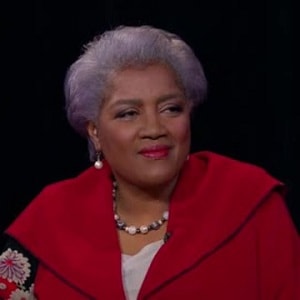 Civic education and civic responsibility should be taught in elementary school.

I was motivated to be different in part because I was different.

Because of my faith and my imagination, I was able to enjoy my childhood, even though it was tough.

Donna Brazile has never been married. Furthermore, due to her secretive nature, there is no information relating to her past relationships. Currently, she is believed to be single.

She has not revealed any details regarding her future plans for her relationship.

Who is Donna Brazile?

Donna Brazile is an American political strategist, campaign manager, political analyst, and author. Currently, she is the member of the Democratic Party. Additionally, she briefly served as the interim chairperson for the Democratic National Committee in spring 2011.

Donna was born in New Orleans, Louisiana on December 15, 1959, to parents Jean Marie (Brown) and Lionel Joseph Brazile. For the most part of her early years, she grew up in New Orleans. Additionally, she became interested in politics since her childhood years. She is of American nationality. Furthermore, she belongs to an African-American ethnic background.

Talking about her education, Donna earned a bachelor’s degree in political science from Louisiana State University (LSU) in 1981. In addition, she was a fellow at the Institute of Politics at Harvard University’s John F. Kennedy School of Government.

As a teenager, Donna volunteered for the Jimmy Carter–Walter Mondale presidential campaigns in 1976 and 1980. Furthermore, she has worked on several presidential campaigns for Democratic candidates, including Jesse Jackson in 1984, Walter Mondale–Geraldine Ferraro in 1984, and Dick Gephardt in the 1988 Democratic primary. In 1988, Donna served as deputy field director of the Michael Dukakis general election campaign.

During the 1990s, Donna served as chief of staff and press secretary to Congressional Delegate Eleanor Holmes Norton of the District of Columbia. Additionally, she also served as an advisor for Bill Clinton’s campaign for the presidency in 1992 and for re-election in 1996. Furthermore, she became the deputy campaign manager and was later promoted to the campaign manager of the 2000 presidential campaign of Vice-President Al Gore.

Apart from her political work, Donna also served as a lecturer at the University of Maryland, College Park. Furthermore, she is also a successful author. In addition, Donna is a member of Screen Actors Guild‐American Federation of Television and Radio Artists (SAG-AFTRA) and has guest-starred as herself in three episodes of the CBS drama ‘The Good Wife’. She garnered the News & Documentary Emmy Awards nominations in the year 2011 and 2015.

Donna has not revealed her current salary. However, she has an estimated net worth of around $ 3 million.

Donna recently became part of a controversy after she called out Clinton in a controversial campaign memoir. Additionally, she was also the subject of headlines after CNN parted ways with her after leaked e-mails demonstrated what appeared to be improper collusion with Hillary Clinton’s campaign. She has been part of other several controversies over the years. Currently, there are no rumors concerning Donna and her career.

Talking about her body measurements, Donna Brazile has a height of 5 feet 6 inches. Furthermore, her hair color is Salt and Pepper and eye color is dark brown.