Donna Dixon is an actress and first runner-up Miss World USA 1977. Donna is married to an actor Dan Aykroyd and has three kids. 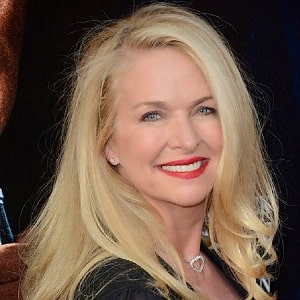 I love Nautilus and stretching. The results are immediate, and that gives me the motivation to continue.

I'm very hard on myself because I know how good my body can look. Dorie has taught me to use less weight and more repetition so I don't become too muscular.

I play Dr. Karen Boyer in 'Spies Like Us.' She's strong, intelligent and dedicated and just happens to be beautiful.

Donna Dixon is a married to Dan Aykroyd since April 29, 1983. Her husband Dan is an actor.

Her best friend Fran Drescher introduced her to Dan. Then Donna and Dan were featured in the comic movie, Doctor Detroit. Her brother in law Peter Aykroyd is also an actor.

This family are living together and spending quality time with each other.

Previously, she was engaged to the singer Paul Stanley.

Who is Donna Dixon?

Donna Dixon is a former American actress and former beauty queen who is known for her work in ‘Bosom Buddies’ in 1980 and ‘Doctor Detroit’ in 1983.

She is also famous for being the wife of actor Dan Aykroyd.

She was born on July 20, 1957, in Alexandra, Virginia, USA. Her birth name is Donna Lynn Dixon and she is currently 63 years old.

Her father’s name is Earl Dixon and her father owned a nightclub on U.S. 1 called Hillbilly Heaven. Information about her mother and about her childhood is not available.

Donna holds American citizenship but her ethnicity is Caucasian.

She attended Groveton High School and graduated from there in 1975 and later attended the George Washington University but dropped out. She studied anthropology in her college.

Donna Dixon started her career as a model and modeled for the prestigious Wilhelmina Modeling Agency in New York.

She appeared in the comedy ‘Bosom Buddies’ in which she portrayed the role of Sonny Lumet.

She worked together with actor Dan Aykroyd in the film ‘Doctor Detroit’ and later starred together in the films ‘Twilight Zone: The Movie’, ‘Spies Like Us’, and ‘The Couch Trip’ in 1983, 1985, and 1988 respectively. Donna retired from acting in 1997.

She has not been involved in any types of rumors and controversies in her career.