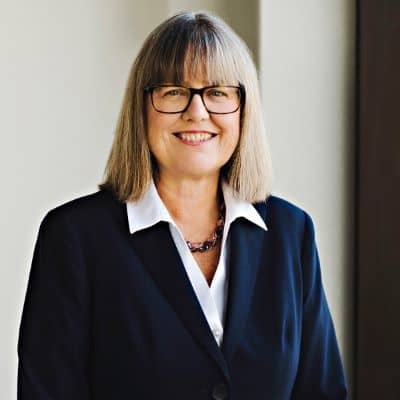 “I have great faith in lasers, but no one’s putting one near my eyes"

Strickland is married to Douglas Dykaar. She first met her partner at the University of Rochester. Both the couple received a doctorate in electrical engineering from the same University.

The couple has two children, a son, and a daughter. Daughter Hannah is a graduate student in astrophysics at the University of Toronto while her son Adam is studying comedy at Humber College.

Who is Donna Strickland?

Donna Strickland is a Canadian optical physicist. She is the 3rd woman to receive the Nobel Prize(Physics) for the invention of chirped pulse amplification (CPA).

Back in 2018, her name was included in the ‘BBC Top 100 Influential Women’. She is a full-time professor at the University of Waterloo. She is known for her pioneer contribution to laser technology.

Donna Theo Strickland is her birth name. She was born on 27 May 1959, in Guelph, Ontario, Canada.  She is 62 years as of today and is a Gemini zodiac.

Her mother Edith J. (née Ranney) was an English teacher. And her father Lloyd was an electrical engineer.

Strickland as a child took a trip to the then recently opened Ontario Science Centre where she saw lasers for the first time. The big lasers there and her father’s statement regarding the future of lasers truly inspired her.

At first, Donna graduated from Guelph Collegiate Vocational Institute. She joined McMaster University because she wanted to study lasers and electro-optics, included in its engineering physics program. She completed the particular course of her interest in 1981.

Donna received a Ph.D. from the University of Rochester in the year 1989. She conducted her doctoral research at the associated Laboratory for Laser Energetics.

The particular thesis is also known as Development of an Ultra-Bright Laser and an Application to Multi-photon Ionization.

Donna has an average height and weight, like most adult women. Furthermore, a brief explanation of Strickland’s body features is not available on the social site. She has fair skin tone, grey hair, brown eyes and wears spectacles.

She researched the method of generating high-intensity, ultra-short optical pulses with supervisor Mourou. In 1985, they were successful in generating ultrashort high-intensity laser pulses. During the process, they did not destroy amplifying material.

The research pair worked on the method of making pulses of high-power laser light of short duration. First, they stretched the laser pulses in time to reduce their peak power. Later they amplified the pulses, finally compressed to decrease the intensity of the pulse and raise it subsequently. Their method is used for corrective eye surgeries.

They created the shortest and most intense laser beams which have given us new opportunities to research further.

From the beginning of the year 1998 to date, she won various awards.

She is an advocate of science rather than gender issues but she explained her undergrad story which shows how deep-rooted is gender biases.

A male student threatened to pound her when she outperformed him in maths class. At the first glance, Strickland was shocked but the inner desire of proving self-worth was delightful. She explains “All I could think was: ‘Girl beat you. Girl beat you bad.”

According to a few sources, her net worth is around $ 1.5 Million. She successfully listed herself among the richest physicist. However, a brief sheet of her annual earning is not available. She lives a modest lifestyle.

From the very beginning, she had a solo focus on her research. Thus, she manages to keep herself away from rumors and controversy.