Donny Osmond is a married person. He married his longtime girlfriend Debbie Osmond on May 8, 1978. Both were 20 years old when they married.

They had met when they were 16 years old and while Glenn was dating his older brother. 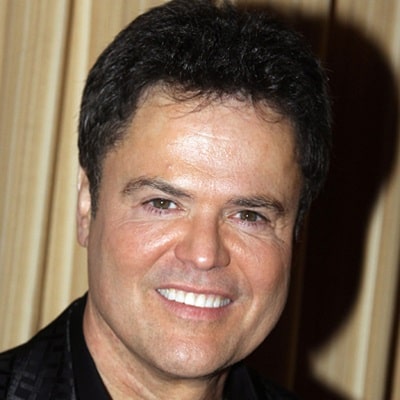 If you're climbing the ladder of life, you go rung by rung, one step at a time. Don't look too far up, set your goals high but take one step at a time. Sometimes you don't think you're progressing until you step back and see how high you've really gone.

I don't have a lavish lifestyle with expensive cars.

Knowing what I know now and what I have been through, would I do it the same? I look at the alternative - a very simple life. It would have been nice to have a simple life.

Who is Donny Osmond?

Donny Osmond is an American singer, dancer, actor, author, and TV host. He is well known as one half of Donny & Marie, alongside younger sister Marie Osmond.

He was born on December 9, 1957, in Ogden, Utah, USA, as Donald Clark Osmond. Donny was born to mother Olive May Osmond and father George Virl Osmond, who were both the patriarch of the singing Osmond family.

He has eight siblings. His brothers are named Alan, Jay, Jimmy, Merrill, Wayne, Virl, Tom, and his younger sister is named Marie Osmond.

He attended American School and Holy Cross High School for his education.

Donny Osmond began his career at a young age, as a member of the singing group The Osmonds alongside his brothers Alan, Jay, Merrill, and Wayne. After a successful audition for The Andy Williams Show, the group soon became regulars on the show.

He made his debut performance in 1963 with the song You Are My Sunshine. In his teens, he became a  teen idol after a series of hit songs and albums. After The Osmonds disbanded in the 1980s, each brother sought a solo career and hoped to reach a more adult audience.

He along with his sister Marie Osmond began to star in their own TV variety series The Donny & Marie Show in 1974. The show aired on ABC between 1976 and 1979. He went on to host Pyramid, The Great American Dream Vote (2007), Identity. He once again worked in Donny & Marie for two years after its revival in 1998.

As of 2022, his net worth is estimated to be around $18 million while there have been no estimates on his annual salary.

Like most of the Osmond family members, he is a member of The Church of Jesus Christ of Latter-day Saints. He was embroiled in controversy when he stated that he opposes same-sex marriage but does not condemn homosexuality.

Likewise, he added that he believes homosexuals should be accepted in the Church if they remain celibate.

To know more about Kate Harrison, Ricky Garcia, and Josh Richards, please click on the link.