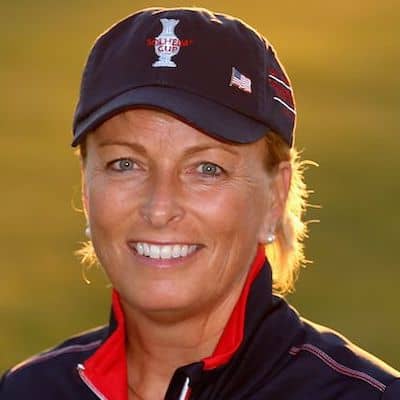 What is the relationship of Dottie Pepper?

Dottie Pepper’s relationship status is married. She for the third time exchanged vows with a writer and historian, David Normoyle.

They wedded in the year 2010 but their wedding details are unknown.

Dottie’s first husband’s data is not revealed but her second spouse is Doug Mochrie. They were married from 1986 till 1995.

From the three marriages, she did not welcome any children yet.

Who is Dottie Pepper?

Dottie Pepper is an American golfer and broadcaster. She has worked for networks such as ESPN, CBS, and more.

In her golfing career, she has won 17 LPGA Tour, 1 LPGA of Japan Tour, 1 Symetra Tour, and 9 Other Tours.

Her birthdate is 17 Aug 1965 and she was born in Saratoga Springs, New York, the US. The name of his mother was Lynn and her father’s name was Don.

Dottie’s ancestry is Caucasian and as per academics, she is a graduate of Furman University.

Dottie Pepper from an early age developed an interest in playing Golf. In her University days played for the Furman University. Then in 1988, she started to play professionally.

Then in 2004, she announced her retirement and started commentary of Golf in 2005. She used to report for NBC and The Golf Channel. She left this job in Dec 2012 but later signed a contract with ESPN to report the major tournaments only.

Moreover, Dottie is also an author and co-wrote Bogey Tees Off: A Lesson about Bullying, Bogey Ballton’s Night Before Christmas, and more.

By the reports of 2021, she has accumulated a net worth of around $1 million US. The per year salary of her is unknown.

This sportsperson is keeping himself away from rumors and desperate scandals.

Dottie Pepper’s height is 5 ft 5 inches and her body weight is 70 kg. In addition, she has blue eyes and has hair in blonde color.