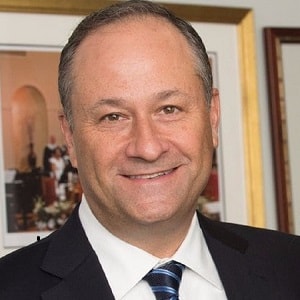 She spends days thinking about the menu, grinding her own pepper, driving all over town just to find that one ingredient that we need, i've gotten pretty handy in the kitchen as her sous-chef.

Douglas Emhoff is a married person. He has been married to Kamala Harris since August 22, 2014. The wedding ceremony took place at the Santa Barbara County Courthouse in Santa Barbara, California. The couple got engaged on 27 March 2014 after the blind date arranged by their friend.

He has two children: Ella and Cole from his first marriage with Kerstin Emhoff. Cole is a graduate of Colorado College, while Ella studies at Parsons School of Design. According to the magazine report, two children affectionately call their stepmother “S-Mamala”. Currently, the family is living together in Brentwood, California.

Who is Douglas Emhoff?

Douglas Emhoff is an accomplished litigator, lawyer, and strategic advisor who is best known as the husband of Kamala Harris. Harris is known as the Junior US Senator from California.

He was born on October 13, 1964, in New York, USA. He is currently 54 years old. The lawyer has not disclosed information regarding his parents and siblings.

Douglas holds American citizenship but his ethnicity is Caucasian.

He attended California State University and graduated from there in 1987 with a Bachelor of Arts Degree in Communications and Media Studies. He also achieved a Juris Doctorate degree from the University of Southern California, Gould School of Law.

Douglas Emhoff has worked as a managing partner at Whitwell Jacoby Emhoff LLP in Beverly Hills for six years and he joined Venable LLP in August 2006 as its Managing Director on the West Coast. Also, he took charge of their branches in Los Angeles and San Franciso. He worked there till September 2017 and partnered with the global law the same month.

Over the past decades, he is serving as one of the go-to lawyers in California and he recently became a new favorite of tabloids. According to some speculations, he could become the first ‘First Man’ of the US, if his wife, Kamala Harris runs for the Presidency in the elections of 2020.

He has an estimated net worth of around $5.8 million and he has earned that sum of money from his professional career. Douglas along with his wife donated $32,947 to charity. He had massive stock holdings in companies like Citibank, Monsanto, and Wells Fargo.

He has been successful in keeping himself away from rumors and controversies in his personal and professional life.

Douglas Emhoff has a height of 6 ft. 0 inches and weighs 79 kg. He has hazel eyes and brown hair.