Stephen Dougray Scott is a Scottish actor who was in ‘Mission: Impossible 2’. 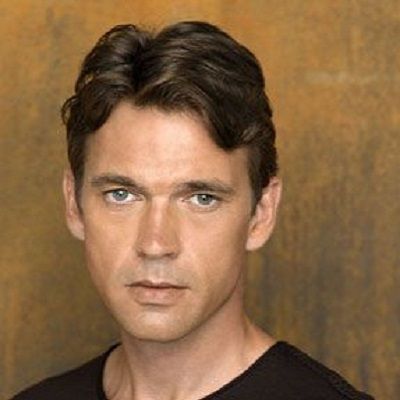 this very ordinary person who finds himself in extraordinary circumstances.

You should be careful what you wish for, as the reasons for war get confused. One person can be very clear in their motives, but others can have different agendas.

In terms of jumping into a character's skin, I try to immerse myself in the role as much as possible to bring me closer to them. All I do is what's required to achieve what I want to achieve.

Scott was dating Sarah Trevis. The couple had their wedding in 2000. They had 5 lovely years together. They together have twins Eden and Gabriel Trevis Scott born in 1998. But they separated in 2005.

Currently, he is married. After Sarah, he was dating Claire Forlani. Claire is a prominent English actress who is best known for her roles in movies such as Mallrats, Basquiat, Meet Joe Black and more.

The couple married 0n 8th June 2007. They also adopted a son Milo Thomas Scott on December 27, 2014. The couple has been together since. There have been no rumors about extramarital affair, divorce or separation to date.

Who is Dougray Scott?

Stephen Dougray Scott is a Scottish actor who is popular as the antagonist ‘Sean Ambrose’ from the American action spy film ‘Mission: Impossible 2’.  He is still regarded as one of the most fascinating villains of the ‘Mission Impossible’ series. He began his career as a theater artist and eventually ventured into television and films as well.

Dougray was born as Stephen Dougray Scott on November 26, 1965, in Glenrothes, the United Kingdom. His mother’s name is Elma Scott who was a nurse.

And his father’s name is Alan Scott who was an actor and salesperson. He picked out his stage name Dougray from his grandmothers’ surname. Dougray is of Scottish nationality and ethnicity is unknown. He gets inspiration from his father, to take up an acting career.

Scott attended the Royal Welsh College of Music & Drama in Cardiff in 1984. While there, he earned the college’s Most Promising Drama Student award. He then graduated in 1987.

Scott made his first appearance in the 1994s movie Princess Caraboo as Dragoon captain. Since then, he has been seen in movies like Regeneration, To Kill a King as Thomas Fairfax, Mission: Impossible II, The Ten Commandments as Moses. He is noted for TV series like Desperate Housewives as Ian Hainsworth, Highlander: The Series, Strike Back. He was cast as Wolverine in X-Men but due to his Mission Impossible filming, he was replaced by Hugh Jackman.

In 1992, Scott portrayed the role of ‘David Sellors’ in three episodes of the television miniseries ‘Tell-Tale Hearts’. He appeared in another television series, ‘Stay Lucky’ in 1993, as ‘Alex.’

His first major role on television came in 1995 when he portrayed ‘Major Rory Taylor’ in eleven episodes of the British television drama ‘Soldier Soldier’.

In 1998, he portrayed ‘Prince Henry’ in ‘Ever After,’ a romantic drama film inspired by the fairy tale ‘Cinderella’. However, after considering many actors, the role eventually went to Daniel Craig for the next Bond movie ‘Casino Royale’ in 2006.

Scott appeared in ‘The Ten Commandments’, a miniseries that dramatized the biblical story of Moses, where he portrayed the lead character. From 2006 until 2007, Scott played the role of ‘Ian Hainsworth’, the love interest of Teri Hatcher’s character, in the series ‘Desperate Housewives.’

His next big role in films came in 2007 when he portrayed the main antagonist ‘Mike Whittier’ in the action thriller film ‘Hitman’, which was based on the video game storyline of the same name. In 2011, Scott portrayed the role of the legendary football manager Sir Alexander Matthew Busby in the BBC television drama ‘United’.

He was nominated in Teen Choice Awards, 1999. Likely, he also has been nominated for AFI Awards and Astra Awards. However, he has not won any yet.

Scott’s net worth is $ 5 million which he earns from his acting career. His salary and other income sources are kept in a veil and unknown to the media.

Rumors were that Dougray Scott will be portraying the role of the Wolverine, however later he was not shelved for the cast.

He stands tall at a height of 6 feet and has a weight of 78 Kg. He has a well-defined face and a masculine body. The actor has dark brown colored hair and blue colored eyes.