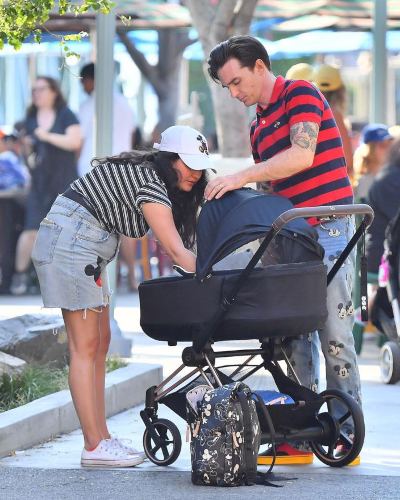 Drake Bell who is currently awaiting his sentencing after pleading guilty to attempted endangering children and disseminating matter harmful to juveniles has shared some unexpected news about his life. On 29th June 2021, he tweeted that he is married and has a child.

“In response to various rumors that are incorrect, I have been married for almost 3 years, and we are blessed to be the parents of a wonderful son. Thank you very much to all my fans around the world for your good wishes.”

He announced the news after he and his wife Janet Von Schmeling were photographed with a baby stroller and matching golden bands on their wedding ring fingers during a visit to Disneyland. In their pictures, Bell was seen pushing around the pram at the California theme park. He also carried his baby in his arms at a point.

Also read Drake Bell Denied The Abuse Allegation From His Ex-Girlfriend Melissa Lingafelt! What Were The Allegations?

Why was Drake charged?

Drake Bell has pled guilty to two charges against him in Cleveland with attempted endangering children and disseminating matter harmful to juveniles. He initially pled not guilty but has agreed to a plea deal. He said that he was guilty of both charges during a virtual court appearance. The judge said,

The incident which led to his charges occurred on 1st December 2017 when he was scheduled to perform at a venue in Cleveland. Also, he was engaged in an inappropriate chat with a 15-year-old girl that was at times sexual in nature.

Drake Bell is an American actor, singer-songwriter, voice actor, and instrumentalist. He has received a number of Nickelodeon Kid’s Choice Awards for his role in The Amanda Show and Drake & Josh.

Bell also appeared in several commercials. Likewise, he is well-known as the voice of Peter Parker in the animated series Ultimate Spider-Man. While appearing in Drake 24/7, he also performed the theme song for Drake & Josh. Read more bio…