Draya Michele is an actress and fashion designer who founded a brand named Beige & Coco.

Draya is engaged as of now. Currently, she is the fiancée of American football player, Orlando Scandrick. The couple started dating in July 2013. After that, they dated for a couple of years. And finally, they got engaged on August 21, 2015. They have been on and off in their relation. But as of now, they are living happily enjoying each other’s company. They have a child together named, Dru. Dru was born in 2016.

Before this engagement, she has been in multiple relationships. In 2010, she dated a rapper, Wiz Khalifa, and Bernard Berrian. Afterward, she was in a relationship with the singer, Chris Brown from 2011 to 2012. In 2013, she was in relation with French Montana. Previously, she has also had an affair with Gilbert Arenas, Kenyon Martin, and DeShawn Stevenson.  During her affair with former NBA player, Gilbert Arenas, she had a child named, Kniko. 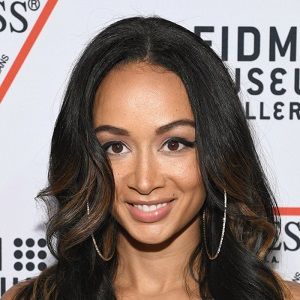 Who is Draya Michele?

Pennsylvania-born Draya Michele was born as Andraya Michele Howard on January 23, 1985. She is an actress and fashion designer. Additionally, she is also a model and media personality. She is active professionally since 2011.

Presently, she is a prominent figure in the media as the famous fashion designer and founder of the clothing line, “Beige & Coco”. Furthermore, she is also the owner of the fashion line “Mint Swim”, and “Fine as Girls”.

Draya was born in Reading in the state of Pennsylvania. Born on January 23, 1985, she is 32 years old as of now. She possesses American nationality and her ethnicity is a mixture of Italian and African-American descent.

She is Italian from her mother side and African-American from father’s side. She grew up in her own home state. Talking about her early life and childhood, she wanted to be Posh Spice when she was young.

As per her education or academic achievement, there is no information regarding it.

Draya is a multi-talented personality. She is a model, actress, fashion designer, and a media personality. Initially, she initiated her modeling career. She appeared in several commercials and fashion events. She did modeling for different brands.

Draya Michele: Salary and Net Worth

Presently, she earns a massive amount of salary and has a net worth of $600,000.

This fueled a huge controversy in the media. Additionally, she received a huge amount of black lash or criticism from internet users.

Draya Michele has the height of 5 feet 7 inches. She weighs 62kg. She has black hair and dark brown eyes. Besides these, her body measures the size of 36-23-38 inches. Her bra size is 32D.