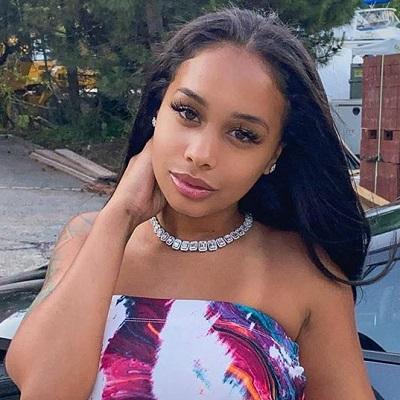 Previously, she was dating the Chopsticks rapper, YBN Almighty Jay. They started dating back in 2019. However, they broke up with each other after dating for some months.

During an interview, she confirmed that they are not dating anymore. Also, she labeled him a toxic person too.

American DreamDoll is a reality TV star, singer, and songwriter. She is renowned for her appearance in the reality TV series like Bad Girls Club and Love & Hip Hop.

DreamDoll was born as Tabatha Robinson on the 28th of February 1992 in The Bronx, New York in a working-class family.

Her mother, LaTonya Clark is of British ethnicity. But her father’s details are not disclosed.

She is the eldest among her four siblings including two sisters and two brothers.

Professionally, DreamDoll started her career as a bartender. During the time, she had a generous amount of followers on her social media account. However, she first got in the limelight when she appeared in the TV reality show, Bad Girls Club. Her journey in the reality show was quite tough as she got involved in a fight that caused her to leave the show.

After that, she featured the reality TV series, Love & Hip Hop. Moving forward, she explored the music industry as a rapper and songwriter. In 2017, she launched her first extended play, Life In Plastic with 7 tracks. Her track, Love is Blind has more than 1.7 million plays in the SoundCloud.

In the following years, she released her second extended play, Life In Plastic 2 with 10 tracks. Some of the most popular songs of her career include On Ya Head, Thot Box, and Fall Thru.

Besides singing, she also made her appearance in the short movies including Trace Cyrus ft. DreamDoll: Summer and Thot Box Remix.

Apart from that, her earnings as an actress range from $20k to $214k. Also, she makes through the brand promotion through her Instagram post too.

Back in 2016, she made headlines when she was removed from the show, Bad Girls Club. In the second episode of the show, she was involved in bullying housemates. Even, she also assaulted the housemate, Kailie too.

In her initial days, she was arrested by the police under the charge of prostitution. At the time, she used to work at Starlet’s Gentleman’s club as a bartender.

DreamDoll has black eyes with brunette hair. However, she prefers to experiments colors such as blonde and white with her hair.

She stands at a height of 5 feet and weighs around 60 kg.

Also, she is active on TikTok with over 444.7k followers and around 2.9 million likes. Apart from that, she also has 232k subscribers on her self-titled YouTube channel.

You may also read the bio of Flo Milli, Raashan Ahmad, and Gift of Gab.