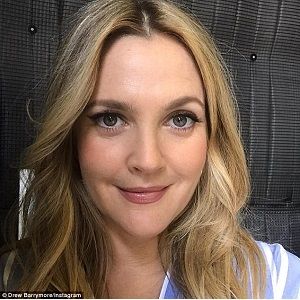 Life is very interesting... in the end, some of your greatest pains, become your greatest strengths: I never regret anything. Because every little detail of your life is what made you into who you are in the end: Everyone is like a butterfly, they start out ugly and awkward and then morph into beautiful graceful butterflies that everyone loves.

Drew Barrymore started staying in the relationship at very young age. When she was 19 years old she had engaged with Leland Hayward but the engagement didn’t last long and broke up after few m0nths.

Then on March 24, 1994, she had married to her first husband  Welsh-born Los Angeles but again filed divorce from him less than two months later. Then in 1999 she dated with the MTV host and comedian Tom Green and married in 2000. As before this relationship did not last and separated in 2002.

In 2002, she began dating The Strokes‘ drummer Fabrizio Moretti, soon after they met at a concert. Their 5 years relationship ended in January 2007.

Likewise, she began dating Justin Long, but they broke up in July 2008. In 2011, she started dating art consultant Will Kopelman, announced their engagement in 2012 and married on 2 June 2012.

Who is Drew Barrymore?

Drew Barrymore is an actress, author, director, model as well as a producer and belongs to Americano culture. She is a member of the Barrymore family and granddaughter of  John Barrymore.

Her famous roles as a child actress in Steven Spielberg’s film E.T. the Extra-Terrestrial in the year 1982. She has also suffered from drugs as well as alcohol but still, she continued her profession and released her autobiography, Little Girl Lost in 1991.

In the year 1998, 2004 and 2014 she starred with Adam Sandler in The Wedding Singer,  50 First Dates and Blended respectively. And recently she works in the Netflix series Santa Clarita Diet from 2017.

Drew Barrymore was born on 22nd February 1975 in Barrymore family who lived in Culver City, California. She is the daughter of actor John Barrymore and aspiring actress Jaid.

Her name “Drew” was driven from the maiden name of her paternal great-grandmother, Georgie Drew, and her middle name, “Blythe,” was the original surname of the dynasty founded by her great-grandfather, Maurice.

She grew up on Poinsettia Place in West Hollywood until the age of 7 and then shifted to Sherman Oaks. And again when she turned 14, she moved back to West Hollywood.

While growing she started to learn bad habit at very young age. She had started smoking at the age of nine, drinking alcohol at age 11, smoking marijuana at age twelve and snorting cocaine at age thirteen.

Due to these habits, she was rehabbed at the age of 14 as well as she had attempted suicide at the same age. Then later she moved own apartment at the age of fifteen.

She had attended her primary school Fountain Day School and  Country School. Besides these, there isn’t any further information about her studies in social sites.

Drew Barrymore started her career in the 1980s where she had a small role in the Altered States. In 1992, she played Gertie in E.T. the Extra-Terrestrial which was directed by Steven Spielberg.

Following the years, in 1994 she played a girl with pyrokinesis who becomes the target of a secret government agency known as The Shop. She had also played a young girl divorcing her famous parents in Irreconcilable Differences in the same year. ]In the early 1990s, she had forged an image as a manipulative teenage seductress, beginning with Poison Ivy.

In 1992, she had posted a nude click for the magazine with her then-fiancé, actor Jamie Walters. Next year she took on the role of the younger sister of a murdered ballerina in No Place to Hide and starred as a writer. Similarly, in 1994 she appeared in the western comedy, Bad Girls.

When she turned 19 years old, she again posed a nude click for the January issue of Playboy. She had also re-established her image and continued to be a highly bankable star by the mid of the 1990s. Then in played Julia Sullivan, the friendly waitress of Robbie Hart.

In 2000, she played the trio of investigators in Los Angeles which became successful in the box office. In 2009, she starred in the ensemble comedy He’s Just Not That Into You, which garnered mixed reviews from critics, who observed her limited time on screen.

While moving towards 2010, she had co-starred with Justin Long in Nanette Burstein’s Going the Distance. In 2011, she directed the music video for the song “Our Deal,” for the band Best Coast as well as starred with John Krasinski in the drama Big Miracle till 2012.

She had played Lauren Reynolds, a recently divorced woman ending up on a family resort with Jim Friedman in 2014. Likewise in 2017, she launched a women’s fashion line in conjunction with Amazon called Dear Drew.

She has played many movies and earns many awards. In 1999, she was honored by the Young Artist Foundation with its Former Child Star “Lifetime Achievement” Award.

She was also tied for eighth place on the top ten list of actresses’ salaries in 2006 according to The Hollywood Reporter‘s annual Star Salary Top 10. In 2007, 2009 and 2015  she was hosted as a female host.

Drew Barrymore is a controversial person and has suffered from many rumors and controversy. Her recent controversy is about the picture clicked with her daughter and posted on the Instagram.

The picture was about the hair color in which both mother and daughter had done which turned into controversy for the public.

Drew Barrymore: Salary and Net Worth

She has earned $125 million as per net worth but her salary hasn’t been mentioned on the social sites.