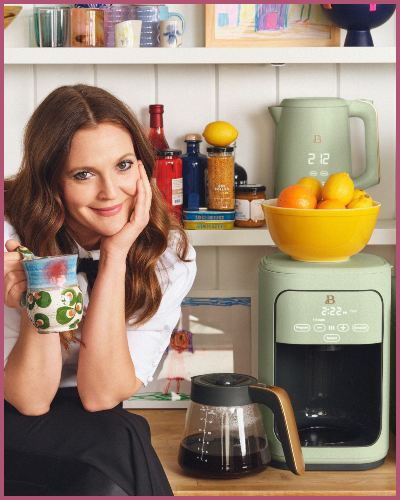 Drew Barrymore, 47 is all aggressive to hammer her kitchen and ultimately get the house renovated!!!

How is the house renovation of Drew Barrymore is going on?

Barrymore personally loves to change her kitchen interiors very often. But this time, it’s extreme guys, she is all in with the hammers like an aggressive baby.

The home renovations are going pretty extreme as she shares a recent Instagram video on June 20, 2022. She herself is featured in the clip hitting off the tiled walls and shelves of her kitchen.

Also, Read Adele is all Smiles with her Boyfriend at NBA after Purchasing a New Mansion Together!

Seems like Drew Barrymore can demolish a kitchen on her own

Drew Barrymore is quite regular when it comes to home renovations and the kitchen seems to be her favorite.

Back in 2021, Barrymore completed her long-time kitchen project but seems like not worthy. A year passed on and she is in her business to break the kitchen project intensively from last year with hammers.

Drew Barrymore is wearing protective eyewear as she hit the racks with hammers. Not only that she is hitting it hard, but also shares a few laughs amid the hammering and saying ouch.

Drew is often involved with her Crew design expert Mikel Welch while restructuring the homes of others. Even her website reads,

“Drew puts her love of design to use improving the living spaces for people spreading positivity around the world.”

Drew Barrymore possesses a Hamptons beach house that cost $5.5 million as of 2022. The home is built lavishly in a 5,600 square feet area on 1.7 acres of land.

She has also purchased a house in Hawaii also, known as the Garden Isle. She has a net worth of around $150 Million accompanied by an impressive real estate portfolio.

Also, Read more about Amy Roloff has moved out of Roloff Family Farm and into a self-purchased house in the vicinity costing $588.5k!

Meryl Streep is 73! A look into the Life of Hollywood’s Most Beloved Star!
Tags : American Actress Celebrity House renovation The Drew Barrymore Show