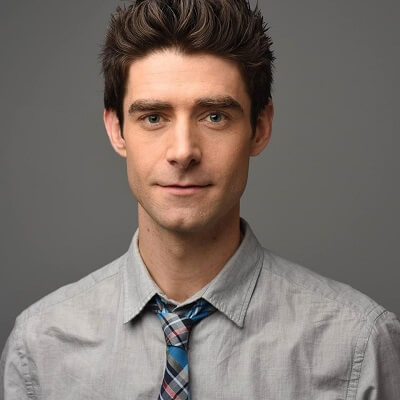 “Does that woman really think i'm my own twin brother? of course she does. she's hooked up with both of us.”

What is the relationship of Drew Gehling?

Drew Gehling is currently in a relationship. He is dating Julia Mattison. Mattison is an actress and writer known for her work in Brooklyn Sound and How to Be Single.

Previously, he was married to Sara Jean Ford. She is an actress and singer. The couple got married in 2009. From their marriage, they have one daughter named Anne Kelly Gehling. There is no information about when they divorced.

In 2017, he was in a relationship with actress Betsy Wolfe. The couple met at a mutual friend’s birthday party at Glass House Tavern. She was also a part of the cast of Waitress. They broke up after dating for some time.

Who is Drew Gehling?

Drew Gehling was born Andrew Shearer Gehling on October 16, 1982, in Greensboro, North Carolina. As of 2020, his age is 37. There is no information about his parents. Similarly, he has not revealed anything about his siblings and other family members. He spent his childhood days in Sedgefield, North Carolina.

Gehling was interested in acting since his childhood days. He performed as a child actor in several shows with the Greensboro Children’s Theatre and Livestock Players Youth Theatre.

His ancestry is German.

Talking about his education, he went to Carnegie Mellon University in Pittsburgh.

Drew Gehling made his Broadway debut in ‘Jersey Boys as Bob Gaudio. After that, he played the memorable role of Warren Smith in the Broadway revival of ‘On a Clear Day You Can See Forever. Moreover, he has performed Off-Broadway in Anne of Green Gables and A Minister’s Wife. His works include;

His most known work came in 2016. Gehling was the originator of the character of Jim Pomatter in the famous Broadway musical, ‘Waitress‘. He earned fame and recognition for his work there and remained there until April 2, 2017. On June 27, 2017, he returned to star with Betsy Wolfe. In July 2018, he gave yet another memorable performance as President Bill Micthell on ‘Dave’ in Washington D.C. at the Arena Stage.

Drew also has acting credits in various TV shows, movies, and even games. He gave voice to the character, Gord Vendome in the popular action-adventure game by Rockstar Games, ‘Bully‘. Some of the TV Shows he has appeared on include 30 Rock, Smash, Elementary, The Good Fight, Dietland, Succession, and The Code.

How much is the net worth of Drew Gehling?

As of 2022, Drew Gehling has an estimated net worth of around $1 million. However, there is no information about his salary. An average actor in America earns around $45k a year. Moreover, a Broadway actor, on average earns around $61k a year.

Gehling has brown hair and green eyes. There is no information about his height and weight. Similarly, he has not revealed his shoe size.

The American actor has not been involved in any controversies. He has kept himself away from any kind of controversy or scandal. He has not done anything controversial so far in his career. Moreover, he is a well-respected stage and film actor. Similarly, there are no rumors about him.

You may also like to read the Age, Bio, Body Measurements, Net Worth, Relationships, Career, Social media, and more about Lizze Broadway, Kellie Overbey, Nick Cordero, and more.