Drew Pinsky aka Dr. Drew is a media personality and internist. 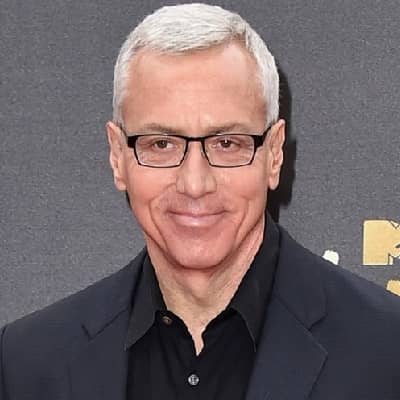 Drew Pinsky is currently married to Susan Sailer. They exchanged vows on 21 July 1991 and his wife’s Instagram is followed by over 10k people.

They together have three children, a daughter named Paulina Marie Pinsky. Their sons’ names are Jordan Davidson Pinsky and Douglas Drew Pinsky.

Who is Drew Pinsky?

Drew Pinsky aka Dr. Drew is an American media personality and internist. He is also an addiction medicine specialist.

As a podcaster, he hosts shows such as several podcasts, including The Dr. Drew Podcast, This Life with Dr. Drew, Dr. Drew After Dark, and The Adam & Drew Show.

He was born as David Drew Pinsky on 04 Sep 1958 in Pasadena, Los Angeles, California, United States. Moreover, his father was Morton Pinsky and his mother’s name was Helene Stanton.

Moreover, about his academics details, he attended Polytechnic School and Amherst College. Then he enrolled at Keck School of Medicine at the University of Southern California.

From there, he achieved his Doctor of Medicine degree from there in 1984.

Drew Pinsky started his career through radio. He used to do a segment called Ask a Surgeon at KROQ-FM in 1984. Then in 2007, he became the host of a talk show Dr. Drew Live. He also hosted Dr. Drew Midday Live with Mike Catherwood and Loveline.

Besides radio, Drew is also a TV star. He has been appearing in several TV shows and movies like New York Minute, Big Stan, Wild Hogs, etc. Some of his shows are,

He holds a predicted net worth of $20 million as per the sources. The salary and other earnings of his are not disclosed.

When the coronavirus hit the US, in March 2020, Drew said that this is not as bad as flu. He told people to the media is spreading panic regarding the virus as it is not serious.

However, later in April, he requested people to follow the safety guidelines of Anthony Fauci. Anthony is an  American physician-scientist and immunologist.

Unfortunately, in Dec 2020, Drew got infected by the coronavirus.

Regarding Drew Pinsky’s body features, his height is 6 ft and his body weight is 78 kg. Moreover, the color of his eyes is green and he has grey hair.

He is also active on Instagram and has over 239k followers.