Drew Scott is a Canadian reality star, realtor. Drew is married to his longtime girlfriend since 2018.

Drew Scott is in a married relationship with Linda Phan. He met his wife for the first time at a Toronto Fashion week event in 2010. They engaged on December 13, 2016. Their marriage was held in Italy on May 12, 2018. They are also planning to have children. However, he has not announced his wife’s pregnancy.

The couple lives together in Las Vegas in the home that Drew owns with brother Jonathan. 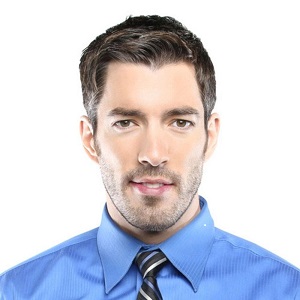 On acting: The key to unlocking your true potential is continuous effort. Whether training, creating your own work, or networking

you should always be doing something

I find that I've never been one to worry or get worked up over the little things. Things always work out. Something that looks like a big deal in the moment never is as big as you thought when you look back at it.

Who is Drew Scott?

Drew Scott, is a Canadian actor, realtor, and entrepreneur. He came to fame through the TV series Property Brothers as a co-host. He is also a co-founder of Scott Brothers Entertainment which creates and produces TV shows, films, and digital content.

Drew Scott was born on April 28, 1978, in Vancouver, British Columbia. His nationality is Canadian and ethnicity is native Canadians.

His birth name is Andrew Alfred Scott. His father’s name is Jim Scott and mother’s name is Joanne Scott. He has a twin brother, Jonathan and a younger brother James Daniel. His birth was a surprise to his parents because they thought that they were giving birth to a single child.

On his seventh birthday, his father encouraged him and his twin brother to get jobs and hence, they decided to start their business called JAM to making nylon covered hangers.

Drew attended Thomas Haney Secondary School and graduated from there itself. He was active in sports, both coaching and playing on the basketball and volleyball teams. For his higher studies, he went to the University of Calgary and specialized in Kinesiology.

Drew co-hosts the hit shows property Brothers, Buying and Selling, and Brother vs. Brother with his twin, Jonathan. As of 2017, it was HGTV’s highest-rated show. In 2013, Drew, Jonathan, and J.D hosted the radio Show off Topic with the Scott Brothers for Canada’s Corus Entertainment.

In 2015, Drew and Jonathan launched their first outdoor furniture line, Scott Living, on QVC. And by the end of 2016, the line had crossed 100 million in revenue.

Dream Homes an extension of the brand provides high-end customized architecture and home elements for homeowners with budgets in the millions of dollars. They also hosted a Scott Brothers-themed cruise, Sailing with the Scotts. His first book with Jonathan titled Dream Home was released on April 4, 2016.

The twin’s fourth TV series, Property Brothers: At Home (2014) aired on HGTV in the United States, as well as on the W Network in Canada. The series was the highest-rated HGTV series premiere since 2009.

They were invited to be the guest judges on Hell’s Kitchen and design a house for the models on American’s Next Top Model. On March 29, 2016, Drew and Jonathan were guest presenters at the Grand Ole Opry.

He has a net worth of $100 million but his salary is not revealed yet.

However, it seems that they have been with his girlfriend for six years so the rumors have no basis at all. The girlfriend of the Drew star has been one of the people behind the show Scott revealed that he appreciated her presence when filming “property Brothers” because she keeps them grounded the “Property Brothers” star and Phan work for Scott Brothers Entertainment.

The “Property Brothers” stars engagement and will hopefully end rumormongers from their speculations about his sexuality.

Drew Scott has a good height of 6 feet 4 inches and a weight of 85 kg. He has dark brown hair color and his eye color is hazel brown.

Drew Scott and wife Linda Phan are finally successful in their two-years of fertility journey!