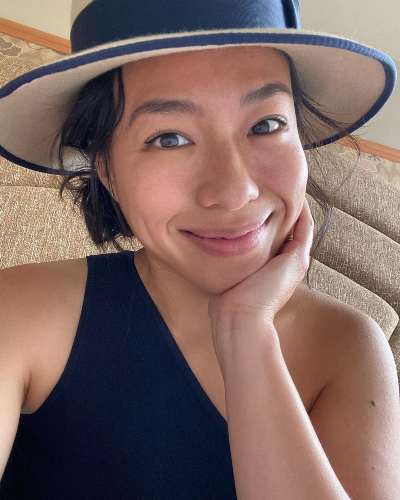 The property brothers star Drew Scott and his wife Linda Phan are expecting their first child together.

The beautiful couple announced Phan’s pregnancy news on 21 December 2021 via an IG post in which she shared a photograph of herself next to Drew with the caption, ‘It has been an adventure to get here!’.

Drew presently serves as the creative director and producer for the Scott Brothers Entertainment production company.

Earlier, she worked as a barista at a Cineplex Theater. She is a big fan of Disney.

How old is Linda Phan?

As of 2022, Linda is 36 years old. She celebrates her birthday on the month of 22nd April. Phan hails from Toronto, Canada. She is of Canadian nationality and of Asian descent.

Phan grew up with four siblings; three older sisters and a younger brother.

The couple first met at the 2010 Toronto fashion week. At the event, she dressed as the “fashion police” in which she wore a big cop badge and handed out tickets for bad fashion.

The couple began dating and started living together in Las Vegas in 2014. On 13 December 2016, Scott picked an Italian restaurant to purposed Linda and arranged for the staff to play his own cover version of Train’s Marry Me.

The property brother got down on one knee and popped the question with the 1.2 carats round cut solitaire. The couple then walked down the aisle in a Destination wedding held in Italy on the 12th of May 2018.

For their big day, the bride wore a wedding gown designed by Claire Pettibone while the groom wore a kilt by Claymore Imports.

They asked their guest to make donations to ‘WE Charity’ instead of bringing wedding gifts. Their marriage was featured in a segment of the ‘TLC’ show ‘ Entertainment Tonight’.

Do Drew Scott and Linda Phan have a child?

The couple is expecting their first child together after nearly 12 years of togetherness. Their baby’s due date is May 2022. They have had a long fertility journey in that they underwent both IUI and IVF treatments.

Drew Scott, is a Canadian actor, realtor, and entrepreneur. He came to fame through the TV series Property Brothers as a co-host. He is also a co-founder of Scott Brothers Entertainment which creates and produces TV shows, films, and digital content. See more bio…