Updated On February 2, 2023 | Published By: Gracie Hale
Share this
In Relation 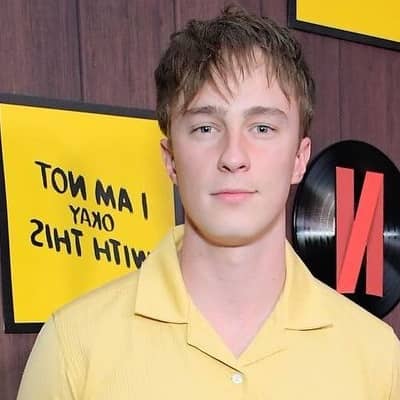 What is the relationship of Drew Starkey?

Drew Starkey is currently in a relationship with co-star Claire Van der Linden. She is also an actress.

On March 14, 2014, he posted the picture together with his girlfriend. However, the couple hasn’t officially confirmed their relationship personally.

Similarly, there was a rumor that came out of his affair with Rachel Fox Marie after he shared a picture with her in 2018 with the caption, ‘love doves’.

Just like his current affair, the pair neither confirmed nor denied their rumors.

Who is Drew Starkey?

The actor was born on November 4, 1993, in Hickory, North Carolina, United States. He holds an American nationality and belongs of Caucasian descent.

He is the son of Todd Starkey and Jodi Ballard Hutto. His father is a basketball coach. However, Drew’s parents got divorced and after separation, his mother was married to Brian Hutto. Also, he has three siblings two sisters and a brother.

The name of his two sisters is Brooke Starkey and Mackay Starkey whereas his brother’s name is Logan Starkey.

He attends St. Stephen High School in Hickory. Then, he graduated from Western Carolina University with a bachelor’s degree in 2016.

Even before his University graduation, he had already been cast in several short films and documentaries. In 2014, he was cast as Jake in Zombies on Campus! A SlaughterPocalypse! which marked his stage debut.

Then, Drew portrayed the role of David in A Doll’s House and Pierce/Duncan in Macbeth Is the New Black which was showcased in Brado Performing Arts Center.

Drew began his career as a theatre and radio artist. After graduation, he appeared in the television film, ‘Mercy Street’ portraying the role of a Gambling soldier.

In the same year, he features in numerous television films such as Shots Fired, Ozark, Dead Silent, Valor, and more.

At present, he has been appearing in the tv series, Outer Banks in the lead role of Rafe Cameron.

Some of his other credit includes,

Until now, Drew has maintained his profile as a well-known actor. He is not surrounded by any rumors and scandals that create headlines in the media.

How much does Drew Starkey earn?

As of 2022, Drew has an estimated net worth of $700 thousand through her profession as an actor. He also earns from various endorsement deals, sponsorship, and so on.

Moreover, his other income and remuneration are still under review.

The actor stands at the height of 6 feet 2 inches or 188 cm tall. His weight is around 86 kg. Likely, he got hazel eyes color and brown hair.

Furthermore, other body statistics are not available.