Singer Dua Lipa celebrates 25th birthday with interesting wishes on Intagram by her loved ones! Relationship timeline of Dua Lipa and Anwar Hadid

Posted by MarriedBiography Posted on August 23, 2020 | In Dating , Relationship
Share this 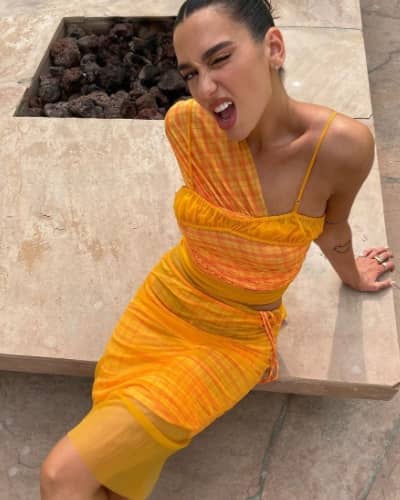 On Instagram, she shared some pictures of in a strappy sheer orange top and skirt. Lipa completed her birthday look with strappy black heels while showing off her delicate arm tattoos.

“You are sweet as pie … a blessing to our fam and the world Love u sister,”

“4 my love!!!! Happiest of birthdays!!! LOOKI THAT SMILE!!! Woweeeee!!! LOVE YOU ENDLESSLY LETS HAVE A BLAST”

4 my love!!!! Happiest of birthdays!!! LOOKI THAT SMILE!!! Woweeeee!!! LOVE YOU ENDLESSLY LETS HAVE A BLAST

Also read The Insight Of 21st Birthday Bash Of Famous TikToker Bryce Hall; Is It A Huge Risk During The Ongoing COVID-19 Pandemic?

“Me and my boyfriend have a flat there but because I was meant to go on tour at the end of April, we were meant to not carry on our lease”

Dua Lipa is a British singer, songwriter, and model. She came into the spotlight after she launched her debut album. Moreover, two singles ‘Be the One’ entered in the UK top-10 single as ‘New Rules’ became the UK number-one single.

Additionally, she has also won several awards for her achievements such as MTV Europe Music Awards in the category of Best New Act, BBC Radio 1’s Teen Awards for best single, and much more. Read more bio…